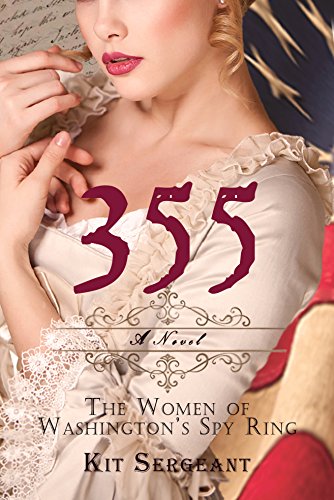 Who was the Mysterious 355?
A semi-finalist in the GOETHE Book Awards for post-1750s Historical Fiction
Culper Ring members such as Robert Townsend and Hercules Mulligan are well known for the part they played in the Revolutionary War, but who was the mysterious 355 that could "outwit them all?" Inspired by many of the same characters featured in AMC's Turn and the Broadway musical Hamilton, 355: The Women of Washington's Spy Ring chronicles the lives of three remarkable women who use daring, skill, and, yes, a bit of flirtation, to help liberate America.

British sympathizer Margaret (Meg) Moncrieffe expects to find the carefree America she remembers as a youth when she returns from her Irish boarding school. Instead she finds the new country at war, with her father on one side and her new love, Aaron Burr, on the other. When her misguided attempt to end the war results in dire consequences for the Continental Army, Meg switches allegiances in order to amend the damage she caused.

After her husband Jonathan is captured by the British and dies aboard one of the notorious prison ships, a pregnant Elizabeth Burgin realizes she is stronger than she once thought. When a prominent member of the Culper Ring enlists her help on a heist of the prison ships, Elizabeth readily accepts, putting herself and her family in jeopardy in order to save the lives of strangers.

Patriot Sally Townsend wants nothing more than freedom for America. When her family is forced to take in enemy soldiers, Sally seizes the opportunity to garner information from them and pass it on to her brother, Robert, knowing that one false move could result in the noose for both of them. Instead of finding herself in danger when British intelligence officer Major John André shows up at her family's doorstep, Sally finds herself falling in love. But Major André is playing the same dangerous game as her and Robert, albeit for the other side.

Told from the viewpoints of these three women-including the one operating under the code name 355-355: The Women of Washington's Spy Ring is an absorbing tale of family, duty, love, and betrayal.

Like her character Addy in Thrown for a Curve, Kit has a practically useless degree in marine biology. A teacher by profession and at heart, Kit loves to impart little-known facts and dares you to walk away from one of her books without learning at least one new thing. She has written a few "beach reads" with intelligent and strong female leads. One of them, What It Is, was a previous Kindle Scout winner. Her newest book, 355: The Women of Washington's Spy Ring, keeps the strong heroines that are essential to Kit's books, but takes them back 240 years, to the genesis of America and the women who helped spawn it.