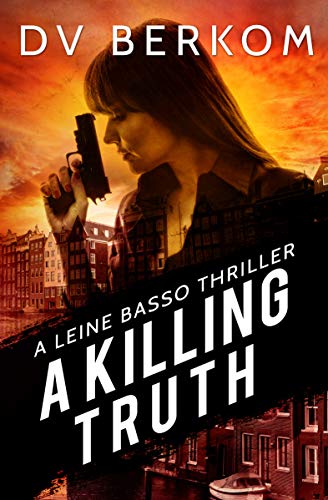 $3.99
Share on Facebook
Share on Tweeter
Now available: the chilling beginning to the high-octane, can't-put-it-down Leine Basso thriller series.
A deadly assassin. A perpetual target. A double-cross she never saw coming…They say the truth will set you free, but what if it kills you first?

Leine eliminates terrorists for a living. After a routine assassination almost gets her killed, she chalks it up to a fluke. Her lover and fellow assassin, Carlos, has another idea altogether. He thinks their boss is setting them up for a fall.

When Carlos goes missing and a bombing thwarts another mission, Leine suspects the stakes are far higher than she could ever imagine, and wonders if the man in charge might have it in for her after all.

A Killing Truth is the prequel to the award-winning Leine Basso thriller series of crime novels. If you like no-nonsense heroines, page-turning plots, and twists you won't see coming, then you'll love D.V. Berkom's tension-filled series.

DownloadA Killing Truth to find out how the story began…

"[Leine Basso] is a sassy, kick-arse, no-nonsense, I'll-eat-your-balls-for-breakfast type of woman. She simply rocks. Berkom's books are ones when you almost forget to breathe. They're fast-paced, taut with tension and sheer joy from start to finish."~Cath'n'Kindle Book Reviews

"This is my third Leine Basso, and like the others, the action never lets up. Leine is the female Jack Reacher only she does it all without being 6'5" and weighing 265 pounds, so that makes her more incredible. If you like page-turners, you'll love this book." ~ Polly Iyer, bestselling suspense author

"A Killing Truth would make an excellent introduction to D.V. Berkom's writing...she's one of my favorites... love how she just puts you right in the pages and you just don't want to end." ~Hornfan2

"The Leine Basso series by DV Berkom is jam-packed with action and adventure and Leine Basso is one bad*** protagonist..." Fundinmental Book Reviews

"As someone who has read all of the other current Leine Basso books first, I can say that A Killing Truth had me in suspense the entire time." Maranda, Amazon Reviewer

"Non-stop twists and turns. An excellent thriller that pits Leine against not only international criminals but her own boss." ~USMC-Mike

"What the world needs now is more female characters like bad ass Leine Basso. Bought the trio of books that follow this prequel because of how much I enjoyed the plot and twists along the way." ~shzann