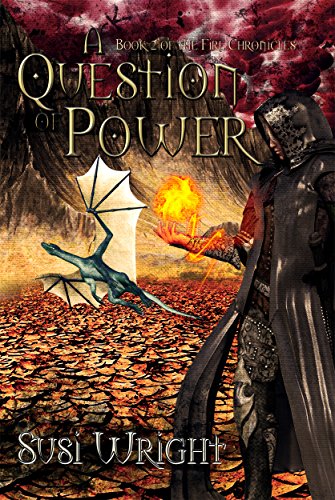 A Question of Power: #2 The Fire Chronicles

This is the burning question which must be answered.

The Lord of Fire's adventures continue, as he takes the helm of the Alliance between humankind and his own Gaian clan.
Newly elected as governor of Baram, entrusted by title to fulfil ancient prophecy as Supreme Protector of both races, Luminor sends his most promising young warrior Xandor to search for other lost Gaians and bring them to safety.
Xandor's mission takes unexpected turns, as he also searches for his betrothed, and his sense of duty and honour are tested to the limit.
Meanwhile, a terrible threat looms, a challenge to Luminor's birthright, and to save all his people from its dark magic, he must take the battle to a foreign land, playing into the hands of a power-mad adversary.
Luminor's unique ability to control the Four Fires, courage and love are on his side, but will it be enough to settle the question of power once and for all........
Or will he die trying?

Susi was born in London, grew up and was educated in the United Kingdom, with a passionate interest in literature, languages, history and art, before emigrating to New Zealand at the age of 20. She travelled Australasia and Asia with her husband, before spending 20 years as a free-lance professional Australian wildlife and equine artist, while they raised a family, on their self-sufficient papaya farm in rural Queensland,Australia. Always an avid fan of fantasy and fiction, she now lives in Toowoomba fulfilling a lifelong dream to write.