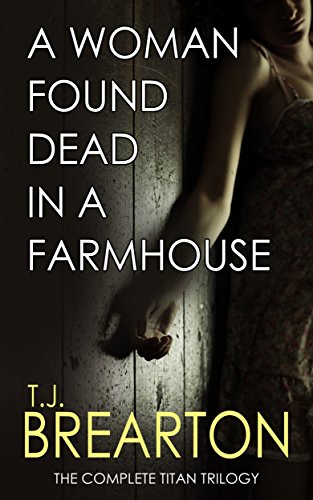 A Woman Found Dead in a Farmhouse

You get THREE full-length thrillers in this edition. Giving you hours of great reading. This is the complete TITAN TRILOGY available all together for the first time

"The single best crime investigation fiction I've ever read. It's well written, believable characters, and the best part is, it's long enough that I have a chance to enjoy it for days." R. Glueck

A woman found dead in a remote farmhouse begins a gripping series of fast-paced detective thrillers unravelling a dark conspiracy
“Evil at the heart of government, a man and a woman determined to uncover a conspiracy that touches on everything they thought they knew.” Chris Child

For the first time ever, the three best-selling books forming The Titan Trilogy are available in one edition.
Follow Detective Brendan Healy’s heart-stopping journey to uncover the truth. It all starts when he’s called in to investigate why a young woman called Rebecca Heilshorn was stabbed to death in her own home. All hell breaks loose when her brother bursts onto the crime scene. Rebecca turns out to have many secrets, and connections to a sordid network mixing politicians, wealth, and sex. Can Brendan solve the murder and how does it relate to his own tragic past?

In book two, we meet Special Prosecutor Jennifer Aiken who is investigating the exploitation of women and human trafficking. The trail will put both her and Brendan’s life in mortal danger, as well as introducing Healy to the fascinating young woman Sloane Dewan, who may hold the key to it all.

Finally in the concluding part of this compelling trilogy, Brendan and Jennifer work together to expose the corruption at the heart of the American government and the people attempting to control the economy, military, and police for their own ends. Can Brendan finally get justice for his wife and daughter and all the other victims of the dark forces subverting freedom?

If you like Stieg Larsson, Jo Nesbo, or Dennis Lehane novels you will be gripped by this heart-stopping crime thriller trilogy

The three books take place in the United States, including many closely observed locales in New York State, somewhere the author knows very well from living there.

Detective Brendan Healy is a recovering addict, whose problems began with a terrible family tragedy. Trained in neuroscience, and supported by his friend Seamus Argon, he tries to kick-start his life by joining the Hawthorne police department.

Jennifer Aiken is a special prosecutor for the Department of Justice, Jennifer gets involved when her Human Trafficking Prosecution Unit takes an interest in the Rebecca Heilshorn murder. Her ordered career and life are torn apart by what she discovers.

ALL BOOKS WERE PREVIOUSLY PUBLISHED SEPARATELY AS HABIT, SURVIVORS, AND DAYBREAK (FORMING THE TITAN TRILOGY)