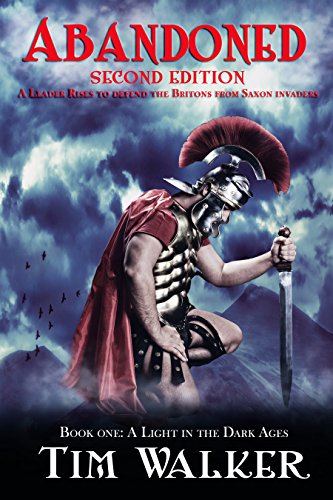 Abandoned (A Light in the Dark Ages Book 1)

In the year 410 the last Roman Governor of Britannia, Lucius, sailed away from the port of Londinium, never to return. Bishop Guithelin's desire for a smooth transition in authority to tribal chief Mandubracius leads only to disappointment. Guided by visions from God, Guithelin undertakes a hazardous journey to a neighbouring country to seek assistance from a noble and Christian ruler.
Abandoned is the starting point for an adventure that sets Briton nobles against each other and a foreign prince, whilst keeping one eye on raiders who spill onto the shores and over Hadrian's Wall. Britannia's abandonment by Rome presented opportunity for some and anguish and misery for others, as the island slowly adjusted to self-rule.
Through the chaos, heroes emerge, including half-Roman auxiliary commander, Marcus Pendragon, who organises the defence of his town from deadly raiders intent on plunder and murder. Guithelin does his best at diplomacy, never giving up hope for a stable and Godly leader to rule over the tribal chiefs and provide a protective shield for the fearful people of Britannia. But is the preening Prince Constantine the right man?
Marcus fights to protect his family from a range of opportunistic enemies, and by so doing establishes a legacy that will lead to his son, Uther, and grandson, Arthur, becoming kings of Britannia.
Abandoned is book one in a series - A LIGHT IN THE DARK AGES - and is followed by Ambrosius: Last of the Romans and Uther's Destiny, the latter a winner of the One Stop Fiction Five Star Book Award.