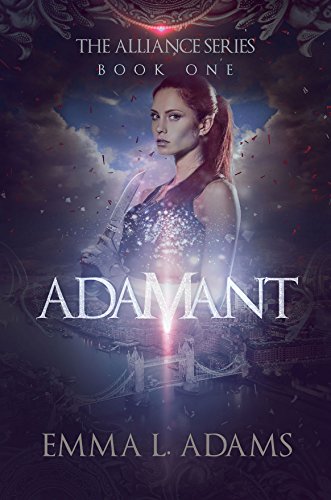 Adamant: The Alliance Series Book One

Ever since a devastating magical war tore apart Ada Fletcher's homeworld, she and her family have lived undercover on the low-magic Earth. Stuck in a dead-end job in London, Ada has spent her life hiding both her true identity and her forbidden magic. At least until she's captured by the Inter-World Alliance and framed for a deadly magical murder she had nothing to do with.

Kay Walker, grandson of the Inter-World Alliance's late founder, expects to spend his first week as an Alliance employee hunting rogue monsters, not solving his supervisor's murder or questioning a strange, fierce young woman with dangerous magic. Killer or not, her abilities raise questions about the Alliance's history, and the closer he gets to the truth, the higher the body count rises.

The last thing Ada wants to do is help the infuriating Alliance guard who arrested her, but it soon becomes clear that the Alliance knows too much about Ada's homeworld -- and her magic. More, in fact, than she knows herself. One thing's certain: she's not the only one keeping secrets, and trusting the wrong person might cost more than her life.​

Emma spent her childhood creating imaginary worlds to compensate for a disappointingly average reality, so it was probably inevitable that she ended up writing urban fantasy and young adult novels. When she's not immersed in her own fictional universes, Emma can be found with her head in a book or wandering around the world in search of adventure.

Visit http://www.emmaladams.com/ to find out more about Emma's books, or subscribe to her newsletter (smarturl.it/ELAnewsletter) for new release alerts and a free short story.