Adrian G Hilder was born in 1970 in Lincolnshire, UK to an English father and a Scottish mother and grew up as a child of the Royal Air Force. Moving house every few years with his parents (and later on brother) was the norm and began when he was four months old.
Adrian has lived on several RAF bases in the UK and Germany, and there was a time when he had spent more of his life in Germany than he had the UK.
His early years in continental Europe meant many family holidays immersed in the bewitching beauty of Bavaria, the Swiss and Austrian Alps. These locations inspire some settings and even events in his stories.

Today, Adrian lives in Hampshire, UK with his wife and three boys just a few miles from where Jane Austen wrote many of her works. As a teenager, Adrian had two great passions: computer programming and fantasy stories.
In October 2013, having worked in the IT industry since 1991, Adrian decided the time to realize his long-held ambition to write a fantasy story was long overdue. His debut story, The General’s Legacy, is the result of combining everything he has learned so far about creating fast paced dramatic stories, combined with what his imagination has been brewing for twenty-eight years. 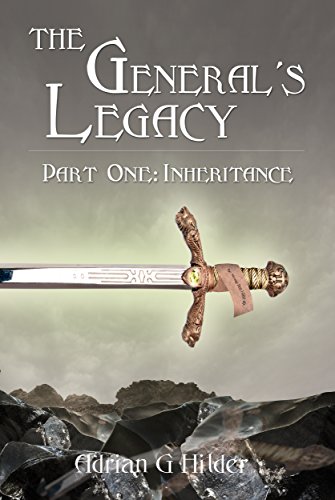 *SPFBO 2017 Semifinalist*
Prince Cory's inheritance is about to get him killed.
An enchanted sword, a world of warriors and magic, and a war without end are now his.
Cory and his grandfather, the legendary General of Valendo, initiate a diplomatic mission in an effort to learn why the war began. Cory welcomes the princess of their old enemy into his stewardship. Despite her presence becoming more than diplomatic, the death of the old general heralds a new and insidious attack at the heart of Valendo. King Klonag of Nearhon thinks nothing of his niece, the princess, in the land he must conquer.