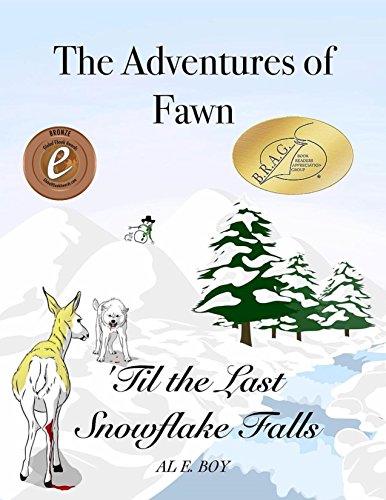 The Adventures of Fawn: 'Til the Last Snowflake Falls

Fantastic! Fun-tastic! Fawn-tastic!!
The Adventures of Fawn is an exciting award-winning 'coming-of-age' series. 'Til the Last Snowflake Falls is the first entry in this series, which has also won a number of awards on its own. The year is 1849, and legendary reindeer Comet and Vixen have a young daughter, Fawn. In this first book, 'Til the Last Snowflake Falls, the young reindeer spends far too many days alone in the stable at Santa's Village, with no friends and nothing to do. While her parents caution her she's much too young and inexperienced to go exploring outside the Village by herself, Fawn disagrees. Declaring, "I want some fun and excitement! I don't care how dangerous it is!" she begins sneaking out each day in search of friends, excitement and adventure. She'll find them all...but also find herself in dangerous situations she's unprepared for! She'll realize perhaps a bit too late that mom and dad were right all along! And, she'll learn some valuable lessons about what's really important in life. The Adventures of Fawn are filled with fun, laughs, excitement, and magical entertainment for readers all ages! 'Til the Last Snowflake Falls was awarded the Bronze Medal in Dan Poynter's 2017 Global E-book Awards, received an Honoree Medallion from indieB.R.A.G. Awards, a Reader's Favorite Five Star Award, One Stop Fiction Books' Five Star Award, and Literary Titan's Silver Book Award.