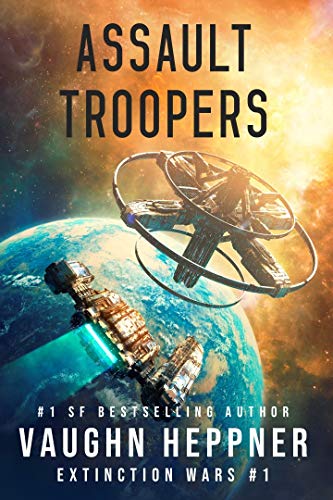 The Earth died when aliens rained thermonuclear warheads on her cities and sprayed the surface with a bio-terminator. A deadly poison drifted to every corner of the planet, threatening the last survivors with annihilation.

For a soldier in Antarctica like Creed, there is only one way to keep breathing untainted air. He must join the Jelk Corporation as an assault trooper, leaving the planet for outer space. In return for his and other people's services, the Jelks will house the last humans for as long as the assault troopers keep winning.

For the price of living and the chance to save humanity, Creed has to wear a shock chip in his neck-Jelk discipline is harsh-and he has to don a symbiotic battlesuit that feeds off his sweat. Human life is cheap in the vast alien war. The assault troopers are little more than suicide soldiers, but for humanity to escape extinction, they must survive. But Creed didn't agree to the bargain in order to remain a dog to the aliens. He has a plan, and he'll need all his cunning to beat the extraterrestrials and begin the road to freedom for the human race.

This book is the first novel in the EXTINCTION WARS Series.