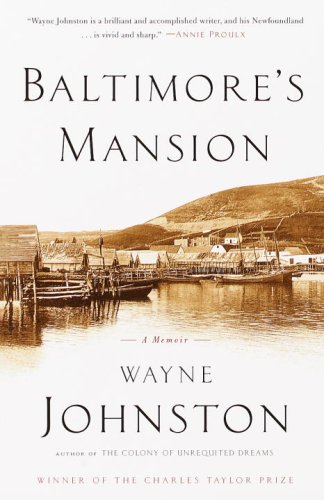 In this loving memoir Wayne Johnston returns to Newfoundland-the people, the place, the politics-and illuminates his family's story with all the power and drama he brought to his magnificent novel,The Colony of Unrequited Dreams.

Descendents of the Irish who settled in Ferryland, Lord Baltimore's Catholic colony in Newfoundland, the Johnstons "went from being sea-fearing farmers to sea-faring fishermen." Each generation resolves to escape the hardships of life at sea, but their connection to this fantastically beautiful but harsh land is as eternal as the rugged shoreline, and the separations that result between generations may be as inevitable as the winters they endure. Unfulfilled dreams haunt this family history and makeBaltimore's Mansion a thrilling and captivating book.

Wayne Johnston was born and raised in Goulds, Newfoundland. After a brief stint in pre-Med, Wayne obtained a BA in English from Memorial University. He worked as a reporter for the St. John's Daily News before deciding to devote himself full-time to writing.

En route to being published, Wayne earned an MA (Creative Writing) from the University of New Brunswick. Then he got off to a quick start. His first book, The Story of Bobby O'Malley, published when he was just 27 years old, won the WH Smith/Books in Canada First Novel award for the best first novel published in the English language in Canada in that year. Subsequent books consistently received critical praise and increasing public attention. The Divine Ryans was adapted to the silver screen in a production starring Academy Award winner Pete Postlethwaite - Wayne wrote the screenplay. Baltimore's Mansion, a memoire dealing with his grandfather, his father and Wayne himself was tremendously well received and won the most prestigious prize for creative non-fiction awarded in Canada - the Charles Taylor Prize. Both The Colony of Unrequited Dreams and The Navigator of New York spent extended periods of time on bestseller lists in Canada and have also been published in the US, Britain, Germany, Holland, China and Spain. Colony was identified by the Globe and Mail newspaper as one of the 100 most important Canadian books ever produced (including both fiction and non-fiction).

Wayne has always been something of a natural athlete - for example, he was once part of a championship ball-hockey team. Luckily (in retrospect) when he was still in the formative stages of considering future career paths, his ice hockey equipment, which was carefully stowed in a garbage bag in the basement was accidentally put out with the trash. The world of literature benefited; is is possible that the National Hockey League lost a star in the process?