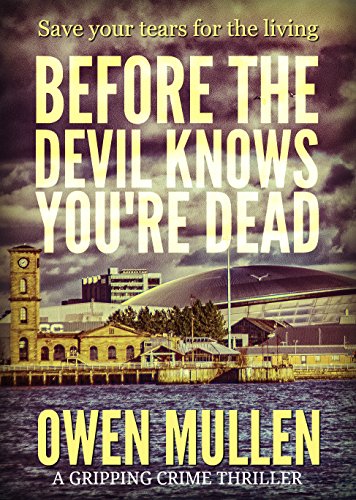 Before The Devil Knows You're Dead (PI Charlie Cameron Book 3)

Gavin Law was a whistleblower.

Just another case for Glasgow PI, Charlie Cameron, until he discovers there is more to Law and his disappearance than anyone imagined.

Wallace Maitland, the surgeon responsible for leaving a woman brain-damaged may have abandoned his sacred oath and become a killer. Did the hospital which refused to accept responsibility for the tragedy have Law silenced permanently? Or, with his wife little more than a vegetable, has David Cooper, believing he has been betrayed yet again, taken justice into his own hands?

Charlie comes to realise the world of medicine can be a dangerous place.

Across the city, East End gangster, Sean Rafferty is preparing to exploit the already corrupt city council in a multi-million pound leisure development known as Riverside. The project will be good for Glasgow. But not everybody is keen to work with Rafferty.

With more than money at stake, Sean will do anything to get his way. His motto, borrowed from his old man, is simple. Never take a no from somebody who can give you a yes.

If that means murder, then so be it.

Charlie has crossed Rafferty's path before and lived to tell the tale.

He may not be so lucky a second time.

What the readers are saying:

'An exciting new voice in Glasgow's crime fiction genre - it will have you hooked from page one!'
Lorraine Patrick
Westender Magazine

I have a very pleasurable problem with Owen Mullen's books - after I have finished reading them, I am spoilt for anything else until I come down off my 'Charlie high'.
Sandy
Goodreads Top 100 Reviewer

This is a cracking read, fast-paced and well plotted. More please!
Chris Nolan

*** Also available in this breathtaking series ***