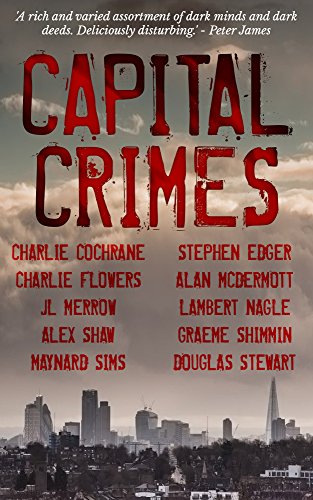 Capital Crimes is an exciting anthology of short stories from ten members of theInternational Thriller Writer's Organisation. It includes:

Three Asian men are taken captive and set alight in Chinatown. Det. Inspector 'Ratso' Holtom investigates their murder, which has many similarities to another, unresolved case ten years earlier...

Holly Kirpachi is a gang member and ex-heroin user whose friend has been murdered. While her husband guards the prime suspect, she goes in search of a solution. A permanent one.

Plumber Tom Paretski and his sister are enjoying a lazy day at a crowded London Pride-until a drag queen is stabbed in a Soho street. Tom sets off in hot pursuit of the culprit, but there's more to this crime of passion than meets the eye.

Marshall Masters is a married barrister who enjoys a lavish lifestyle. He is skilled in getting guilty people off if they can pay him well, and he has never lost a case. But everything changes when he defends a gangster named Board...

A man discovers a dead body at the docks but leaves without reporting it to the police. He decides to take matters into his own hands and soon realises the tailor was not who he seemed ...

GAME OF CHANCE by Charlie Cochrane

When Jonty Stewart signed up for war service, he knew he risked not coming home. He never expected he'd be fighting for his life before he even embarks for France.

MOUNTAIN OF LIGHT by Graeme Shimmin

After a failed suicide bomber attack on Buckingham Palace parachuters land on the Jewel House of the Tower of London in order to take back the Koh-I-Noor jewel that the British stole from India over a hundred years ago.

Vlatko Kasun, the Butcher of Bosnia, is a cruel man. But when his time comes, he discovers that death is just the beginning.

When tech-wizard Neill Plato discovers his aunt has been conned out of hundreds of thousands of pounds during a house sale he turns to the only man he trusts to help him track down those responsible, MI6 operative Aidan Snow.

WHAT GOES AROUND by Stephen Edger

Today is Chris Butler's Wedding Day. He answers the phone in his hotel room, and hears his fiancée screaming in agony. A voice tells him that she won't be harmed further if he does as he's told. Only a handful of people know Chris' true identity, but the caller knows too. Can Chris find his fiancée before his past catches up with him?

"For anyone whose literary tastes run to the dark and the twisty, CAPITAL CRIMES is a damn near perfect taster menu." - Simon Toyne - international bestselling author of theSanctus trilogy

Endeavour Press is the UK's leading independent digital publisher. For more information on our titles please sign up to our newsletter at www.endeavourpress.com. Each week you will receive updates on free and discounted ebooks. Follow us on Twitter: @EndeavourPress and on Facebook via http://on.fb.me/1HweQV7. We are always interested in hearing from our readers. Endeavour Press believes that the future is now.