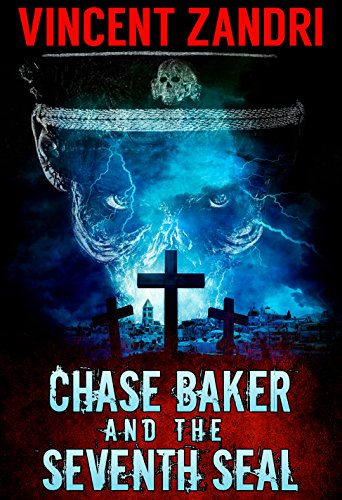 $3.99
Share on Facebook
Share on Tweeter
ACTION. ADVENTURE. ROMANCE...ANCIENT BIBLE CODICES...A MADMAN BENT ON SUMMONING SATAN TO TAKE OVER THE WORLD...JERUSALEM UNDER SIEGE...THE ONLY THING THAT CAN STOP THEM IS CHASE BAKER AND BLOOD FROM THE BODY OF JESUS CHRIST."

When Renaissance man and adventurer, Chase Baker, is contracted by a rich young rare book dealer to uncover seven metal Bible codices or books which rival the Dead Sea Scrolls in Biblical historical significance, he also discovers that the seventh book is sealed with a metal not found on this earth. A metal so impenetrable it can only be broken by God or Satan.

˃˃˃ Whatever the case, the breaking of the seventh seal means one thing and one thing only: the end of the world as we know it.

While Chase will stop at nothing to find the missing codices he discovers that the evil Soldiers of the Expected One led by their leader Ansar Al-Mahdi, have taken possession of them so that they may find a way to break the seal and plunge the world into darkness.

˃˃˃ Chase, along with a beautiful young long brunette-haired New York City-based Biblical History scholar named, Magda, and an unruly team of Hasidic Jews, must defeat Mahdi before they can take possession of the books.

They find themselves not only fighting the fierce evil force, they must scale Jerusalem's Old City walls, crawl down into the Western Wall foundations deep inside its tunnels, fight off all manner of prey and obstacles from giant spiders to the Israeli Army to evil Nazi zombies who rise up from the dead in the Valley of Magida in anticipation of the Second Coming and along with it, Armageddon.

Non-stop action. - I Love a Mystery

(Zandri) demonstrates an uncanny knack for exposition, introducing new characters and narrative possibilities with the confidence of an old pro...Zandri does a superb job interlocking puzzle pieces. - The San Diego Union-Tribune

Scroll up and grab a copy today.