My Writing and the Places I have Visited

Oh, that’s a lovely peaceful image and a picturesque location!

I love the buzz that phrase creates and will probably never tire of it when a reader of my fiction tells me the photo above is just the perfect location for Topaz Eyes, one of my contemporary mystery novels. I’m also really pleased when customers of my novels ask me why I chose to include Amsterdam as a location in that mystery and where my plot ideas came from.

The totally empty Amsterdam street that you see above isn’t exactly typical of that lovely city since it’s generally thronging with passersby. Though, the parked bicycles are an indication of what this spot will be like come the end of the working day. On a short trip to Amsterdam in 2012, I chose to photograph that exact location above because it’s a street, and bridge, which feature in Topaz Eyes. Of course, you’d have to have read the story to understand why the photo is so appropriate!

Is Authenticity Necessary when a Reader Reads Fiction?

I don’t think there are definitive answers to that question because both readers and authors might differ depending on their perspectives. As an avid reader, I like to find that the settings I read about are realistic and if I have any personal experience of the place mentioned, I like the feel of making a welcomed revisit. If something isn’t right, like The Houses of Parliament NOT being down by the London riverside then I might be inclined to give up on the story out of sheer disappointment. As an author, I personally strive for authenticity because I want my characters to be entirely realistic in a credible setting.

An author planning a story after viewing a photograph might seem a great prompt and good practice but all is not so methodical in my writing. My reason for choosing to feature Amsterdam in Topaz Eyes was nothing to do with a photograph but was because once-upon-a-time I lived in Holland for three years. I absolutely love the country but when I wrote the mystery during late 2011, it had been more than a decade since I’d been back to visit Amsterdam. As the plot of the story developed in my mind’s eye, I could see myself in that location above, even though my residence in Holland ended in 1981. But since I make every effort to be accurate in my writing and to be sure of my setting for the ‘bridge’ part of the story, I accessed a current map of Amsterdam and used the actual name of the street—Brouwersgracht, by Prinsengracht.

In May 2012, when I was into the final edits phase for Topaz Eyes with my publisher—Crooked Cat Books—I had the opportunity to make a short journey to Holland. Though my guided tour was mainly to see the Keukenhof bulb fields and the Floriade displays, we had a few hours to wander around Amsterdam. Fantastic! My husband and I got off the coach in central Amsterdam and made a quick scoot along to Prinsengracht where I took loads of photographs. (I’ll confess now that to get the image above I had to wait patiently till no-one was around, probably about 5 whole minutes) I was so pleased with my photographic achievement…but pride comes before a fall. If you’ve heard that expression before, you’ll know there’s generally something awful about to happen and it did!

We left the Brouwersgracht area and fast-paced along to the Kalverstraat. If you’ve ever had the fortune to visit Amsterdam, you’ll probably know that it’s a very long, extremely busy pedestrian shopping street. I was looking for something that was the highlight of our Amsterdam trips when my kids were little—a semi-permanent Poffertje Restaurant (tiny Dutch pancakes) that was all decked out like a mini carnival scene complete with the sounds of a ‘Mortier’ barrel type Organ. The small wooden building had outdoor tables and chairs bedecked with checked cloths which sat behind a low white picket fence. It was the cheeriest sight even in miserable rain.

I gawked at my husband. “How can it not be here?” I squawked. “I’ve written it into a scene in Topaz Eyes!” My novel that was almost through final edits before being published.

My Dutch was barely passable when I lived in Holland but by 2012 it was nearly non existent, so it was just as well everyone speaks English. In the place where my beloved Poffertje Restaurant used to be there sat a multi-storey building. I think it might have been a cinema complex but I was too stunned to really notice. I went into the tiny shop opposite and asked if there was another Poffertje Restaurant nearby. There were others but they were a little walk away.

Nope! My husband had had enough of charging around the cobbled streets of Amsterdam and refused to totter another step. We hadn’t even had a proper lunch, yet, he complained!

One taxi ride later and I was smiling again. The stack of tiny pancakes in front of me was slathered in butter with a drizzle of fresh lemon added, and the whole plate sprinkled with icing sugar. They were perfect…but even more perfect were the changes I was rapidly making in my head to my not-quite-published novel.

When I got home to Scotland after the trip, my editor was a bit bemused that I wanted to insert a different scene but she agreed even though the changes weren’t thought to be necessary. My family told me no reader would notice it: they wouldn’t know there was no longer a Poffertje Restaurant at that Kalverstraat location. But I knew! And it would have rankled ever since if the Poffertje Restaurant where my characters Keira and Teun enjoy their own yummy pancake deserts couldn’t be identified.

Besides—I’ll know exactly where to head to on my next Amsterdam visit!

Did I say I get a lot of pleasure from including LOTS of lovely locations in my contemporary mysteries? Keira and Teun also visit Heidelberg, Vienna, Edinburgh, and Minnesota in the US in the search for the Tiru Salana emerald collection, while avoiding the nasty habits of the deadliest of the cousins. I have very good personal reasons for including those locations but the reasons why will have to be left for another post! Readers who have reviewed Topaz Eyes on Amazon tell me they really enjoy travelling alongside my characters as they also solve the mystery.

Why would three shadows be a problem in Topaz Eyes? And how did I come to take that photograph… ?

I try to use my own photographs whenever possible for promotional reasons but I’m no professional photographer and the quality of my photographs isn’t always good enough. Fortunately, if mine are rubbish, the internet is full of excellent sites where image use can be purchased for the use in my blogs, or across social media.

As a reader of fiction do you enjoy reading about interesting locations that you’ve maybe never managed to visit, or might love to revisit if you have?

Bio: Nancy Jardine’s Celtic Fervour Series of historical romantic adventures are set in 1st century northern Britannia whereas her teen time-travel historical adventure is set in 3rd century Roman Scotland. She finds regular book signing & selling sessions at craft fairs great fun. She loves giving presentations on Roman Scotland, and on her novels, to local groups around Aberdeenshire, Scotland. Her week vanishes in a blur of grandchild-minding, gardening, reading, writing, social media marketing and blogging—not necessarily in that order. Watching TV Drama and the news is a luxury - as are social events with friends and family but she does a creative job to squeeze them in. She’s a member of the Romantic Novelists Association, the Scottish Association of Writers and the Federation of Writers in Scotland. 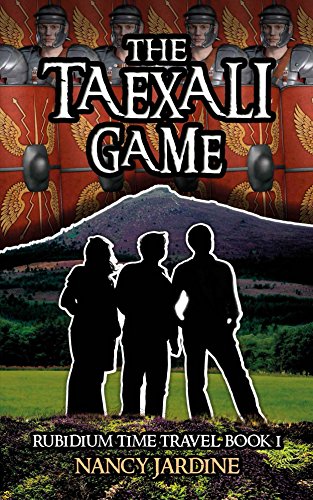 Aran and the twins, Brian and Fianna, love playing advanced interactive computer games. When the Rubidium Time-Leap flips them back to AD 210, the reality is incredible as they fulfil their task list. Staying alive becomes their priority when Ancient Roman Emperor Severus and his legions heap death and destruction on the Taexali Celts of Roman Scotland. Will they complete the mission unscathed? 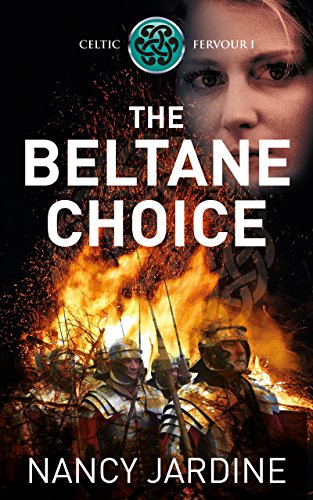 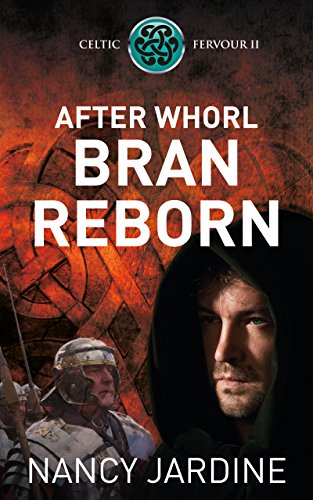 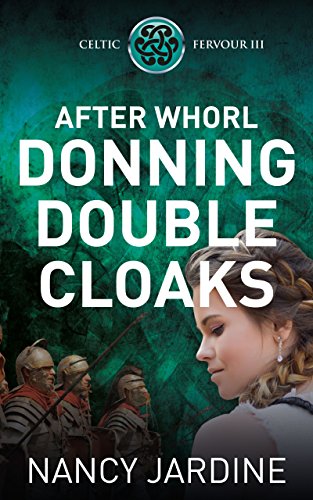 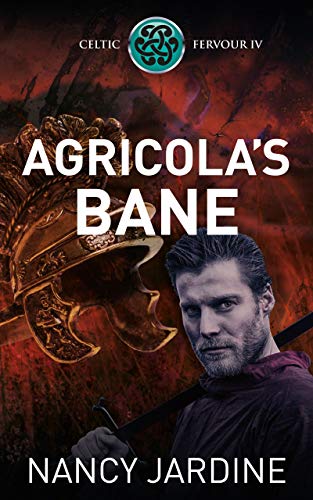 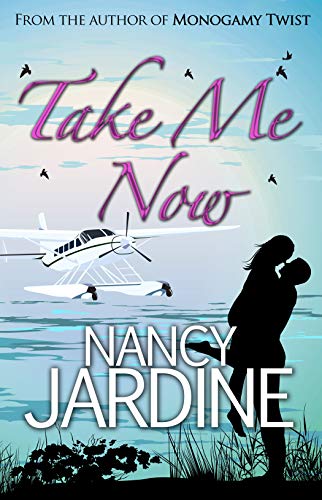 Patience isn't Nairn Malcolm's strong point when someone sabotages his business. It gets much worse when he is also under attack. Who can transport him around from his Scottish island castle base, help keep his business running smoothly, and be available to him 24/7? 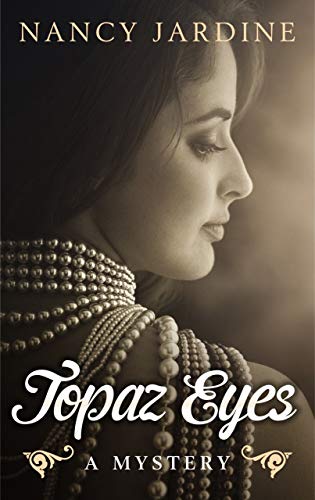 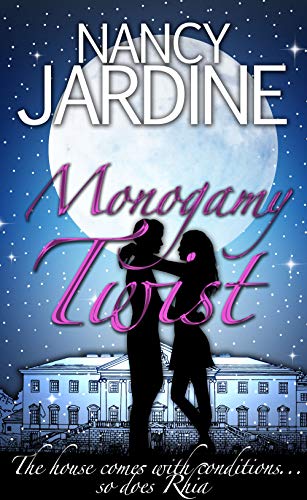