The second volume in the Escape to the West series follows the life of Sara, a mail-order bride who has come from New York to marry Daniel Raine. Sara is instantly attracted to Daniel and is ready to forget her pampered life in New York to become a farm wife in northern California.

Together with his brother Will, Daniel begins teaching Sara the mysteries of farm life from keeping bees to milking cows. This is a period of adjustment for both. They are new to marriage, Sara is new to the farm, and Daniel new to sharing his life and labor.

The affection between them grows stronger and deeper until Daniel is critically injured in a mysterious fire. With a husband in the depths of despair and with the unwanted attentions of a man she'd met on the train, Sara must fight for the man she loves.

This is a deeply Christian romance with its reliance on God's help to see the characters through their darkest days.

The author is very good at writing gentle romance with very little violence and no sex scenes. The two main characters, Sara and Daniel, are shown to be growing in their affection for one another, in their mutual attraction, and most important to the novel, in their growing trust.

Despite being married in the very first chapter, the characters do not even kiss until near the end of the novel. The feelings between them, however, are enough of a titillation to keep Christian romance fans turning pages.

The character of Sara is well done. She is a strong young woman who is a firm believer in the ideal of romantic love. Sara turns away from an extremely eligible suitor because she does not feel the thrill she believes is a necessary part of true love. Despite this somewhat naïve belief, Sara is actually a practical, hard-working woman. Daniel, according to the unwritten rules of romance novels, is tall, dark, handsome, hard-working, and desperately in love with Sara. Romance readers will find comfortable familiarity in the two.

The only character that does not quite fit the romantic pattern is Daniel's brother, Will. A confirmed bachelor, Will has turned away from God and towards the local saloon where he finds comfort in drinking, gambling, and women. It may be that Will will be the main character in a follow-on book once he has found his way back to a moral path.

While the author is good at Christian romantic characters her villains leave much to be desired. In the first book in the series, No One's Bride, the villain was cartoonish in his simplicity. In this second book, the villain is more believable but is still one dimensional.

It is very important that readers understand that this is a Christian romance. The frequent mentions of God's work in the world, the prayers, and the lack of realistic love scenes may not be to every reader's taste. However, those readers who are looking for "clean" romance or who want a book that is quite quick and easy to read will appreciate Ms. Leigh's series. 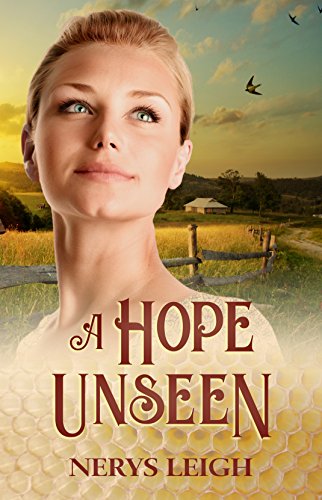 A Hope Unseen (Escape to the West Book 2)