Haunted By a Moment Book Review

At only seventeen, Kat has her life changed forever by a car accident that leaves her in the hospital and three of her friends injured.

Kat has supportive people in her life: her mother, her best friend Elle, and her long-suffering boyfriend Kip. But despite their love and care, Kat continues to feel horrible guilt and depression leading her to make what can only be called the worst possible decisions.

Depending on drugs and alcohol, Kat tries desperately to get her life back on track.

This is an extremely dark story of bad decisions leading to worse outcomes. Readers can see this as a cautionary tale of teenage drinking, drugs, and sex or as insight into the stresses and crises faced by many young people.

Haunted By a Moment is told in a series of flashbacks of Kat's life before the accident and of Kat's life after the tragedy. This was a very effective format. Readers will see that Kat's behavior is not so different after her accident, though her mental state certainly is.

Before the accident, Kat experiences normal teenage angst. She finds her relationship with her boyfriend of four years becoming boring and so seeks out excitement with other boys. She finds school frustrating and uninteresting though she does well in her classes. She is exercising her independence from her parents and making her own decisions. Although Kat is a hard character to like, her "before" personality and actions are easy to understand.

It is only after the accident that Kat's characteristics of rebellion, independence, and desire for freedom turn to the dark side. Unable to honestly confide in counselors, she becomes more and more depressed. Alienated from her former friends, she finds no solace in social life. Even her long-standing relationship with Kip, her boyfriend, deteriorates as he undergoes chemotherapy and brushes aside her attempts to reconnect.

The author has done a good job in portraying the chaos of teenage romance. The characters are torn between morals and hormones. Wanting both love and excitement, characters cannot form real relationships simply because they lack the maturity to do so.

The sex scenes in Haunted By a Moment are also well-done. Readers know that couples are having sex but much is left to the readers' imaginations.

The ending, while not unexpected, comes as a blow to the reader. At this point, I am not entirely sure whether I like the way the story ended - "like" in terms of appreciate - or not. This I will have to leave to individual readers.

There was not one problem left out of the characters' experience. Drugs, alcohol, sex, disease, abuse, and death are all included. Teenagers are known for risky behavior but this combination stretches credulity.

There were numerous scenes of Kat engaging in sexual activity. While the scenes themselves were well-written, they did become repetitive. I found myself skipping whole paragraphs to find out what would happen next in the story.

On Amazon, this book is listed as a selection for teen and young adult readers. I would caution against giving this to anyone below the age of sixteen or seventeen. This is not only because of the sexual content, but also because of the darkness of the story. There is no hope for the main character in this book. 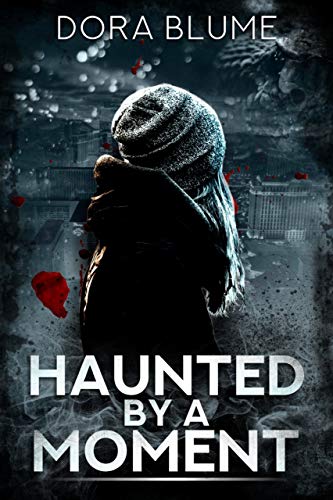 Haunted By a Moment