Having escaped Earth by the skin of her teeth, Imogen finds herself on the planet Holis where nothing, it seems, can be trusted.

Imogen finds herself caught in a tangled web. Leo, friend and admirer, and Imogen's father have been captured and imprisoned as "subversives". In order to rescue them, Imogen must depend on a small group of hunted subversives and on Araz, who may or may not be working for the Holan council. Hunted, not knowing who or what to trust, never knowing where she belongs, Imogen faces danger as she tries to rescue those she loves.

Imogen's Journey is a journey of self-discovery and of finding what is most important in life. This coming-of-age tale is more than simply a story of a maturing young person. It is a story of searching for truth and of devotion to ideals.

The first volume of the Chroma Trilogy, Imogen's Secret, takes place mainly on Earth while this volume takes place on the planet Holis which allows the author the freedom to build a new and exciting world. The wonders of Holis include the complete terraforming of an uninhabitable planet; the development of Flecto, a fabric that can be molded into any shape and can take on the colors of its surroundings; the wonderful Tractus which enables instantaneous interplanetary travel.

Amidst all these wonders live the Holan, a civilization based on peace and cooperation. But, as Imogen quickly discovers, not all is as it seems on Holis. The author has written a fast-paced and complex plot with enough twists and turns to keep readers turning pages as fast as possible. There are secret plots, agents and double agent, and frightening genetic manipulations. These are what Imogen faces as she tries to understand her life and her place in the world (or worlds).

Readers of the first book will find a more mature Imogen here. She is no longer concerned with the problems of earthly teenagers but is now forced to confront corruption and evil. Her attraction for Araz is also growing, though she is still not sure whether he is trustworthy. This is not a simple love story or a simple good vs evil story. It is much more complex with references to everyday life, to corrupt governments, and to weapons that can destroy civilization.

One of the most interesting parts of the novel is the Chronicles. These give a background to the civilization on Holis and explain much of what the reader might have missed in the first book. There is constant suspense in the novel. Who is safe and who is dangerous? Will Keraka's plan succeed? Who can be trusted?

On a personal note, I greatly appreciated the use of ancient Egyptian names (Karnak, Anubis) in Imogen's Journey as well as mention of my favorite Egyptian food, kushari.

There is a vast number of characters in the story, many of whom seem to be living a double life. As a reader, I found this sometimes confusing. It was often difficult to keep the identities of Viziers straight and to know who was responsible for what ministry. Even main characters are referred to by more than one name (Leo/Tarik, for example) and this can also be misleading.

The second point of confusion is the frequent shifts in location and the reference to shifts in time.

While the story is well-written, these complexities made it hard for me to develop a real connection with many of the characters.

Imogen's Journey is the second volume of the Chroma Trilogy and it would definitely help to read the first volume before tackling this one. There is some violence in encounters with the Repros, but otherwise the book contains no explicit scenes that would disturb YA (or adult) readers. The book is designed to lead readers to the third volume where, it is hoped, all the questions raised in this one will be answered. 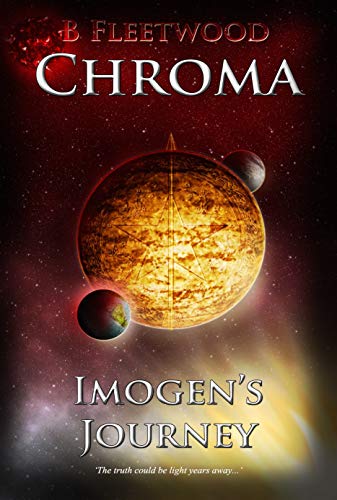