In The Pocket Book Review

Jack Haley arrives at a Toronto police station to turn himself in for unknown crimes. By a lucky coincidence, he is interviewed by the recently married but already unhappy Officer Charlotte Stiles.

Charlotte is sure she has the case of a lifetime when Jack tells her that, in exchange for police protection, he can lead her to the notorious Russian gangster, Boris.

But things are never simple. Jack's stories are credible but Charlotte begins to be suspicious that what he is telling her is far from the whole truth. Casting doubt on her fellow officers, on lawyers, judges, and politicians, Jack leads her through a labyrinth of half-truths and lies until Charlotte has no idea what to believe.

Charlotte has married for security. Jack leads a life on the edge. In In The Pocket readers find characters trying to find themselves and trying to determine what is most important: security or excitement.

Some of my favorite movies are based on con men: The Sting, Ocean's Eleven, and especially The Thomas Crown Affair. The author has taken the basic plot of the last and with a few switches in characters and roles turned it into a fast-paced and funny fable for the 21st century.

It is very hard for the reader to tell what is true and what is Jack's invention in this story and it is impossible for a reviewer to say without giving away key plot points. At first, I like probably other readers, was puzzled by the appearance of Hank, Jack's father. What, I wondered, did Hank have to do with the main story? But, in the end, the author is able to bring all the disparate strands, including Hank, together to a satisfactory if unsurprising conclusion.

The story twists and turns constantly. There is always something new to complicate the plot Jack weaves. In The Pocket is very hard to put down once started.

Both Jack and Charlotte are wonderful characters. I can easily picture Pierce Brosnan playing Jack; he is smooth, sophisticated, charming, and a scoundrel at heart. Charlotte is a bit more complex. Married to the horrible Gary, Charlotte finds herself thinking of her marriage as a prison in which she has locked herself. Convinced by her mother (whose story is equally fascinating) to marry for security, Charlotte is stuck in a marriage that is miserable and a job she is unsuited for. She is Jack's perfect target.

The secondary characters add to the atmosphere. There are the ambitious police officers jostling for promotion; Jack's brother Joe and his wife Nikki with their image of sentimentality; the YouTubers who want either to be famous for making movies or to be "gangsta".

While the plot is complicated, it never stops moving and never becomes dull.

The only thing I found to dislike about the novel is the complicated time references. It is sometimes hard to tell the order in which things happen. However, the pace and tone of the book makes up for that and the solution, in the end, is quite easy to grasp.

Another viewing by a proofreader would make this a 5-star book.

First of all, if readers haven't seen either version of The Thomas Crown Affair, they should watch it as soon as possible. While the plots are similar, the movie will definitely not spoil the book and the book will not spoil the movie. Mr. Lewis writes wonderful crime novels and this one is an excellent addition to a fine body of work. This one is highly recommended. 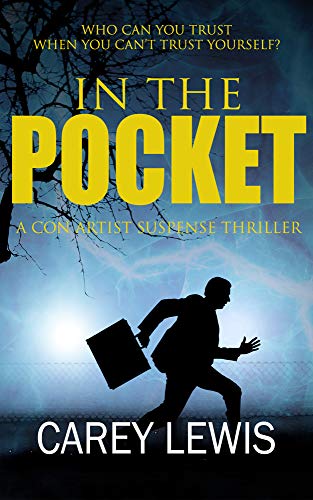 In The Pocket: A Con Artist Suspense Thriller