Mekong Shadows is an anthology of sixteen stories and two poems all set in Cambodia. Most of the stories have been written by established expat writers as the book is being sold in aid of a Cambodian charity. Two of the stories were written by young (15 and 17 years old) Cambodian writers. The stories range in subject from crime to superstition to love and suffering.

The book paints a vivid picture of Cambodia, both good and bad. Although all the stories are individual, they are linked by their somewhat dark atmosphere and the types of characters involved. The reader will find journalists, police, expats, ex-military, prostitutes, tuk-tuk drivers, saints and sinners. The lasting effects of years of chaos and misrule are obvious in each of the stories. There is hope, however, in some of the work, and the fact that two of the entries in the book were written by Cambodian teenagers tells us that the darkness will lift.

One of the threads running through a number of stories in Mekong Shadows is crime, whether corruption, as in Alasdair McLeod’s A Low Sun, or murder in T. Hunt Locke’s Two for the Road and Steven W. Palmer’s Oun Srolanh Bong (Girl Loves Boy). The crimes in these stories are committed in an atmosphere of darkness, of confusion, and of mystery. It is the atmosphere more than the crimes themselves which makes these stories unforgettable.

The Dark Son by Phillip Coggan was, perhaps, the most mysterious in its portrayal of Cambodian superstition. A former Khmer Rouge soldier becomes all-powerful through his belief in magic which ultimately becomes the greatest threat to his power.

Not all of the stories are dark and mysterious. There is a wonderful love story, Ek Madra’s Fight the Enemy, Find Love, a story showing that hope existed even during the worst of the Khmer Rouge, The Hill of Poisonous Trees, and John Burdett’s Happy Ending which features a love story with a surprising ending.

Best of all are the entries by the Cambodian writers. Kosal Khiev’s Returning features both prose and poetry in telling the story of a Cambodian expelled from the United States. His poetry has the rhythm and cadence of the best of rap. The reader can feel the intensity and suffering he expresses. The two stories by the Cambodian teenagers, while not as complex in plot or characterization, are touching in their emotional content. It is important to remember that these stories were written in the authors’ second (or perhaps third) language. After the tragedy of Cambodia’s history, it is gratifying to see that new writers are finding an outlet for their work.

At first I was disappointed to see so few Cambodian writers represented. However, I have since heard from the publisher who chose established writers for this volume because all profits from its sale will be donated to a Cambodian charity. He hopes to issue a second volume in English with more Cambodian writers and possible a third volume in Khmer.

Cambodia had been a complete mystery to me. I was certainly aware of Pol Pot and the murderous Khmer Rouge regime, but knew very little about the present day or the Cambodian culture, including contemporary Cambodian writers.

I was shocked to read of the huge number of intellectuals (meaning literate citizens) that had died under the Khmer Rouge and of the continuing effects on literacy, publishing, and libraries.

In addition to providing several hours of reading pleasure, Mekong Shadows was an educational experience not to be forgotten. 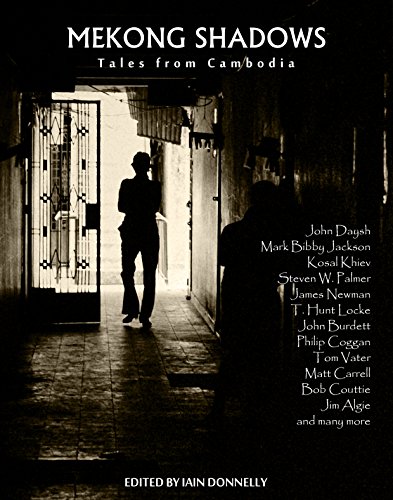