When the slaves of Saint Domingue rose in revolt, only two members of the Lazare family survived:

Marguerite and her grandson Rene. They reestablish themselves in Charleston among other refugees and slave-holding families. There Rene becomes a doctor, marries Mary, a deaf-mute, and has three children: Joseph, Cathy, and Helene. When Joseph discovers the dangerous family secret, he decides to become a priest and to atone for the family's "sin". After studying in Rome, he returns to Charleston only to discover that his long process of atonement and devotion has not saved him after all.

This is a sweeping saga that encompasses the evils of slavery, the strength of one person's devotion, an overwhelming guilt, and a search for salvation.

The book is meticulously researched and includes such disparate elements as the slave revolt on Santo Domingo, the French Revolution, pre-Civil War society, and the elements of the Catholic faith. There is no "Gone With the Wind" romanticism of the pre-Civil War South in this book. There are few loyal slaves and gentle masters; the state of medical care, especially surgery, is frightening. Instead, the author presents the era in all its cruelty, hypocrisy and racism. The novel revolves around the Lazare family: father Rene, mother Mary, and three children, Joseph, Cathy, and Helene. The family lives in Charleston, South Carolina, a state with strict laws regarding the ownership and possible emancipation of slaves. Joseph Lazare, the main character, is shocked and disgusted when he discovers that his paternal grandmother was a slave. This puts him into the mulatto group, only a small step up from slavery. This discovery is the beginning of Joseph's constant feelings of shame and guilt. He is consumed by the fear that, if his secret is discovered, his life and his dreams will be destroyed. These attitudes are hard to fathom today, but the author is true to the times when she emphasizes the destructive results of such ingrained racism. Joseph becomes a Catholic priest and spends most of the novel in a state of fear and guilt, constantly aware of the possibilities of sin and damnation. He is a complex and sympathetic character though not a likeable one. There are some marvelously drawn characters that play minor parts in the saga. M. Noisette, a botanist, who is unable to emancipate his wife and children, is a minor character but one who contrasts with the slave-holding majority. Marguerite, Joseph's grandmother, is not a likeable character but one who is finely drawn and who exemplifies the race and class divisions of the society.

Normally, the main character of a novel evokes strong feelings in the reader. The character can be admired or hated, liked or disliked. The reader can sympathize with the character, cheer him or her on to their final vindication, or commiserate with his or her tragedy. In this novel, Joseph, the main character provoked nothing in me but disdain. Fervently religious and essentially self-centered, he evokes no sympathy from this reader. Everything to Joseph is about Joseph. Even his discovery of his racial status brings about no change in his character. He was the least likeable major character in the novel. The author spends a great deal of time and effort in detailed descriptions of Catholic worship and rites. The prayers, both oral and internal, are interminable. There are long discussions of what constitutes sin. As a reader, I found this tiresome and it slows the pace of the novel considerably. Aside from the slave revolt at the beginning of the book, the main events of the story are births, marriages, and deaths. This was not enough to keep my whole interest.

Readers who are fans of The Thorn Birds will love Necessary Sin by Elizabeth Bell. It introduces a complex social world
with characters ripe for more development. Readers easily triggered by realistic descriptions of the evils
of slavery should be aware that the issue is presented realistically. This is a good but slow beginning to a
family saga and many readers will be interested to see where the author will take the Lazare family next 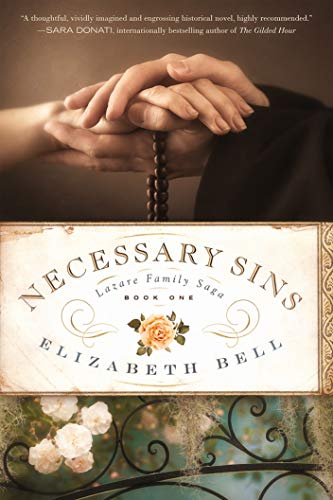