No One's Bride (Escape to the West Book 1) Book Review

Amy Watts is a very reluctant mail order bride. To escape an intolerable situation in the east, Amy answers letters from Adam Emerson and takes the train west to California as his mail order bride. Amy, however, is determined not to marry.

She confesses her determination to Adam and offers to get a job to pay back the train fare before moving on to her dream location, San Francisco. But Amy's plans go awry when she gets to know the kind, gentle, Christian Adam. The growing friendship and warmth between them seems to promise a happy ending until the danger from Amy's past reappears.

This is a Christian love story with an emphasis on faith, trust, and honesty. Both Amy and Adam have faith that the Lord will lead them on the right path.

No One's Bride is a very gently told romance between two people who have trouble trusting others and expressing their emotions. Amy's reluctance to trust is a result of her background and the hard life she has had. Adam has had difficulties with his father and has a broken relationship in his past. Much of the novel is taken up with the slow development of trust and friendship between Amy and Adam. This is a nice change from the usual romance novel arc of love at first sight. It was gratifying to read of a relationship that was based on mature feelings instead of unbelievable reactions.

The town of Green Hill Creek where the story takes place was described as a typical western town with its livery stable, general store, one hotel, a saloon/brothel, an active church, and a sheriff who could have been John Wayne in disguise. This must have been quite a change for Amy who comes from New York City, but the contrast doesn't seem to bother her at all. In fact, she fits right in, especially at the livery stable where she finds George, the owner, as a father figure.

The novel's plot is certainly not unusual. The story arc is predictable but the author has interspersed some moments of drama so that readers' interest is kept alive.

Those readers who dislike romance novels that contain sex or colorful language will be pleased. As a Christian romance, there is no hint of sex between Amy and Adam. The novel contains several Bible quotes and numerous prayers. One Amazon reviewer did complain about a scene of minor flirtation between a married woman and a single man, but readers should rest assured that this is a very minor scene in the book and is never exploited.

The villain in the story is Amy's former employer, Franklin Courtney. He may as well have been named "Snidely Whiplash". Courtney had no redeeming qualities at all and was portrayed as a one-dimensional, faintly ridiculous character.

The story takes place in the late 1800s, in the Victorian era, in a very Christian environment. It is very hard to believe that at that time and place people, and especially a minister, would have accepted the living arrangements of Amy and Adam. This was extremely unrealistic. In fact, the most realistic reaction was that of Mr. and Mrs. Vernon who disapproved so strongly that Adam lost his job at Mr. Vernon's bank. Their reaction was typical of the public reactions to be expected at that time.

Readers looking for a "clean" love story that is quick and easy to read will appreciate No One's Bride. It is not always realistic but it is definitely romantic. 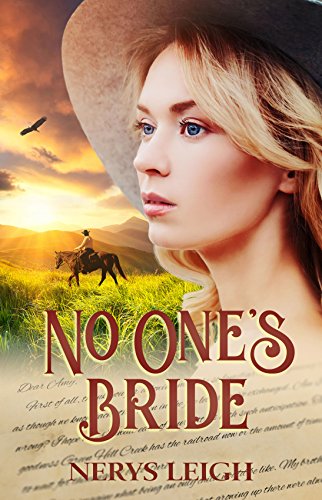 No One's Bride (Escape to the West Book 1)