James Byron is wealthy beyond imagining. He has everything – except his health. James is dying of cancer. As his last adventure, James chooses to visit the facilities of the East Pacific Island Company where he can hunt dinosaurs. Accompanied by his old friend Harry, James sets off into the jungle only to be faced with a danger he could never imagine.

The book combines the thrills and excitement of Jurassic Park with international chicanery. The reader will see that fulfilling a last wish is not always the best choice to make.

Mr. Connolly has a real talent for establishing tension and excitement in his narrative. From the time James and Harry arrive at the Isle des Géants, the tension builds and builds. From narrow escapes to horrifying discoveries, the pace of the action never lets up. The reader will feel himself or herself to be amid the jungle vines, surrounded by insects, and dodging predators. The atmosphere is hot, humid and constantly threatening.

The characters in the story are well drawn and described. James is portrayed as a man who always gets what he wants but ends up being a somewhat sympathetic character at the end. His son, Samuel, is much less sympathetic, but understandable. As the son of a rich and powerful man, Samuel is ready for his turn at the helm but is held back by his father’s presence. Harry is more of a stereotypical nouveau riche character with his penchant for young blondes, his flashy clothes, and his personal weakness. Of the secondary characters, the most entertaining is Dr. Emeraldson, a behavioral scientist whose job it is to train young dinosaurs in the ways of the wild. Finally, Dr. Larcher, the man in charge, at first seems to have the best interests of his guests at heart but later becomes a more sinister character.

The scenes with Dr. Emeraldson with the young dinosaurs are entertaining. Readers will find it easy to picture the professor tickling young dinosaurs behind their ears and establishing himself as the alpha in a pack of predators.

There were two things in this short story, The Billionaire’s Graveyard, that puzzled me. The first was the bidding process. Exactly what were people bidding on? Was it a bid to determine James’ and Harry’s fates? Were people placing bets on whether or not the two would survive? This was not very clear in the book and certainly would have made the motivation of Samuel easier to understand.

The second was the ending that leaves readers up in the air, unsure of what has actually happened. It is easy to guess the fate of James Byron, but it is also possible that the reader’s guess will be wrong.

At first I was afraid that The Billionaire’s Graveyard was going to be a retelling of the plot of the various Jurassic Park movies. To a certain extent, the book does follow the plot lines set out by the films, but it takes these lines further. There is plenty to like about the book and with a bit more content, it would be excellent. 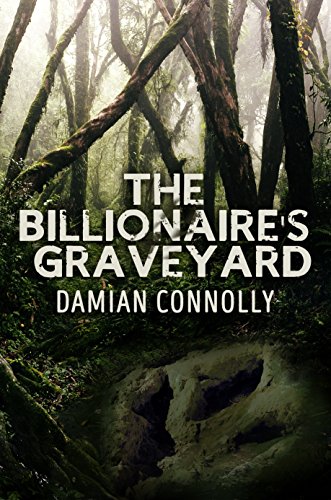