Nika Konstantinos has spent her very long life on the run. Now she finds herself in Seychatka and learns that she is the hereditary queen of the Immortals. Separated from her twin brother Nikolaj at a very young age, Nika must now face him as her enemy – the Alpha of the Totems.

Nika uses her extraordinary abilities and her nearly mystical ties to her twin to work to avoid a devastating war and to find the truth of what happened to her mother. When Nika’s past comes back to nearly destroy her, she faces her greatest challenge yet.

Despite being a fantasy, Totem Rebirth’s true theme is the importance of family, of loyalty, and of justice. These themes are universal and are well illustrated by the characters’ relationships, decisions, and ideals.

It takes a great imagination and great care to develop an alternate universe and maintain consistency throughout a book. Ms. Gibbs has done that very well in Totem Rebirth. She has written of a parallel world occupied by the Immortals, a group that is, indeed, nearly immortal, and the Totems, a group closer to nature and to the nature of their totem, the wolf. In addition, there are the Regulars, normal human beings who are aware of the Immortals and even marry and produce children with them. But the two worlds are separate, with both Immortals and Totems visiting the Regulars only for short times. The Immortals have certainly made the most of their visits, bringing back such innovations as DNA testing, vodka, and champagne.

The conflict in the story between Immortals and Totems hangs on the flight of two small children, twins Nika and Nikolaj, when their mother was killed. At first, Nikolaj seems to be an aggressive and disagreeable character, but when the reader learns something of his history, his behavior becomes more understandable.

Ms. Gibbs uses the typical bond between twins to good effect. Although they start out as enemies, Nika and Nikolaj share a bond that brings them together to form a formidable force. The strength of family feeling shown by the twins and by other characters in the book is one of the story’s greatest strengths.

The reader will have no idea of how much time passes in the story. The plot, despite the lack of a recognizable timeline, moves well and the author does not digress from the action. The characters of Nika, Nikolaj, and Alexi are particularly well developed, while Chloe and Demyan are less well defined but still interesting.

Totem Rebirth can be read as a stand-alone novel but the author does provide a teaser at the end which will encourage fans to read the next volume in the series.

Most of the events in the novel follow a fairly logical progression. The reader will have no queries about why particular actions are taken. What disappointed me was the twist at the end. Without giving away this plot point, I will simply say that it was not only unexpected but also unbelievable.

This novel is crying out for a proofreader. There are a number of issues with vocabulary: one character’s hair is described as tussled instead of tousled; Nika is always referring to the hellish plane – does she mean plain? There are definite issues with grammar, punctuation, and repeated words. The problems do not hinder comprehension, but in an otherwise well-written book, they are disconcerting. A session with an experienced proofreader would easily eliminate these disappointments.

Totem Rebirth will appeal to fans of fantasy and to fans of family sagas. In combining the two, Ms.Gibbs has created a strong theme for an on-going series. 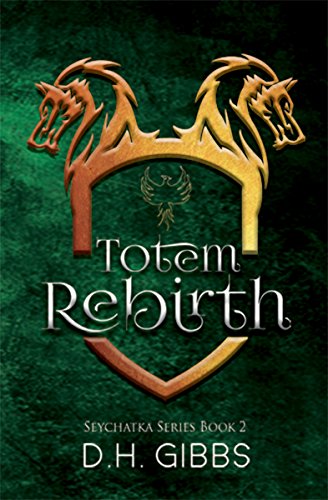