Professor Kate Adams is trying to recover from the death of her husband Max. An old flame, Brad, offers her a chance to manage a CIA safe house in the Alaskan wilderness. Since the offer coincides with a sabbatical, Kate accepts and so begins a voyage from safety to danger of death.

While running the safe house, Kate is trying to understand the computer program her husband wrote before his death. Discovering that there is a cyber plot to undermine US markets leads to Kate being kidnapped and tortured for her knowledge. She learns that, no matter how much she tries, her life will never be the same.

This is a novel that depends for its success on the intelligence and self-reliance of its main character. Though there is a bit of romance in the story, what is most important is the ability to think, to solve problems, and to be confident in one’s ability. It is a novel that shows a female character who is as capable as any of the male characters and who can succeed in a male-dominated world.

It is always wonderful to find an author who can both entertain and educate. Holly Bell manages to do both with ease in Trading Salvos.

Kate Adams, the main character, is a professor of economics and a computer whiz. Even readers who are experts at neither of these will find the story easy to follow. Kate’s research into mini-crashes on the stock markets of the world is fascinating and opens readers’ eyes to the intricacies of trading and the dangers of cyber attacks to the world’s economy. There is no shying away from a technically difficult topic and the book does not try to “dumb down” the theories. Financial thrillers are not easy to write. It is important that the story be accessible to readers but still maintain the sophistication necessary. This one succeeds.

In the first half of Trading Salvos, readers are treated to a fascinating picture of life in the Alaskan wilderness. The descriptions of the area around the town of Talkeetna and Mount Denali, the images these descriptions conjure up of wild and somewhat dangerous beauty, convince the reader that the author has a real love for and knowledge of the area. The independent miners, carefully guarding their claims from all strangers, are wonderfully drawn characters. The hardships of living in such an isolated area – whether from storms or from grizzly bears – underline the strength of character needed to survive and thrive there.

Kate Adams herself is a woman who is both independent and strong. She is shown as able to cope with any emergency and, despite her grief for her late husband, to find intimacy and warmth in her personal relationships. It is almost as if Kate has no weaknesses.

The novel is certainly one of two distinct halves.

In the first half of Trading Salvos, while Kate is managing a CIA safe house, the author gives detailed descriptions of every aspect of Kate’s life. Readers will know exactly what she is wearing, exactly what the safe house looks like, and exactly what Kate buys for her planned garden. While the detailed pictures of the Alaskan wilderness lend authenticity to the isolation of the safe house, the other descriptions become over-long and unnecessary. Learning how to freeze and store blackberries was interesting, but what did that whole process add to the plot? Is it so important to know how to prepare Alaskan soil for a garden? In her desire to set a realistic stage for her characters, the author has gone slightly overboard in describing all the unimportant details.

In this first half, the plot moves at a slow but steady pace with the author taking her time to introduce and develop characters. This is in complete contrast with the rest of the book where the action moves very fast and the only characters, aside from Kate, are stereotypical villains out to destroy the economy of the West.

The ending is also something of a disappointment. At the end of her books, Agatha Christie had Hercule Poirot assemble the characters and explain the mystery. But, Agatha Christie had always given her readers clues in the body of the story. Here we have an ending that happens almost without warning and that includes explanations that were never even hinted at. The ending felt both rushed and crowded with information that should have been implied somewhere else in the novel.

Trading Salvos is the first in a series of books starring Kate Adams. It is mostly an intelligent thriller with a main character whose position in life has the potential for many more similar adventures. If the author can work a bit more on the endings, this will be a very enjoyable series to follow. 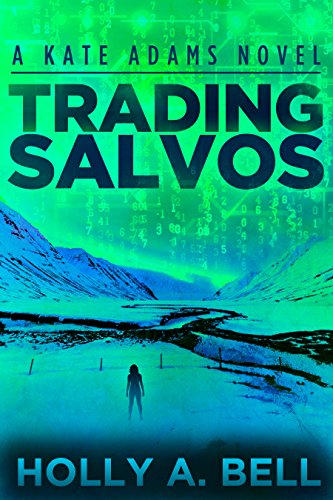 by Holly A. Bell