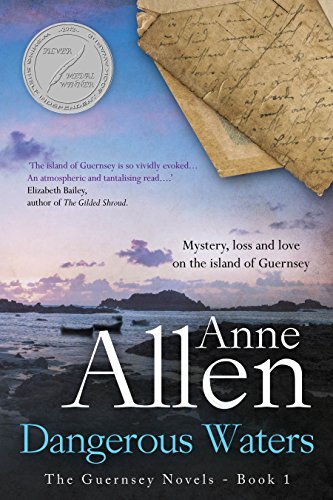 ** Awarded Silver in the 2012 WishingShelfAwards **

Dangerous Waters is the first of The Guernsey Novels, linked but standalone stories, which will appeal to fans ofThe Guernsey Literary and Potato Peel Pie Society.

Can she really go through it again and survive?

She is lucky to be alive … at sixteen Jeanne was almost killed in a boating accident which brought heart-breaking familytragedy. Now, fifteen years later, Jeanne returns reluctantly to the island ofGuernsey following the death of her beloved grandmother. Struggling for breath as the ferry nears the island; she is overwhelmed by a dark foreboding as hazy memories of that terrible day resurface…

Only returning to sell her inheritance - her grandmother's old cottage - Jeanne has no intention of picking up her old life. But the cottage holds asecret, dating back toWorld War II and the German Occupation, and Jeanne becomes drawn into discovering more. Then, soon after her arrival, a chance meeting with an old teenage crush leads her to thoughts oflove.

Jeanne is forced to face her demons, reliving the tragedy as her lost memory returns.

When thetruth is finally revealed, her life is endangered for the second time…

"The island of Guernsey is sovividly evoked, one feels as if one is walking its byways. Anatmospheric and tantalising read." -- Elizabeth Bailey, author of The Gilded Shroud.

"I've never been to Guernsey but I'm determined to go now that I've read this book. It's a book you can settle into and really enjoy, but it's a lot more than chick-lit. There's anintriguing mystery, a finish which had me reading into the early hours of the morning and an insight into what I think of as the back-end of the publishing industry the bit that the reader never sees or even knows exists. It's delivered with a light touch but gives the book real depth. I was impressed. **** -- Bookbag.co.uk