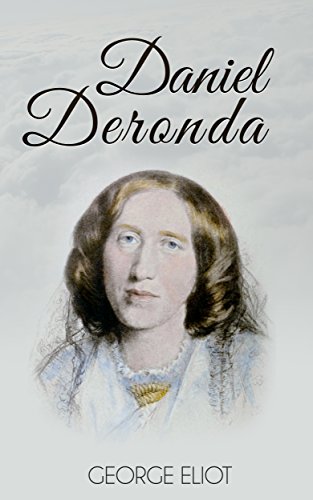 "No evil dooms us hopelessly except the evil we love, and desire to continue in, and make no effort to escape from."

George Eliot's last novel represents the author's summing up, the book in which she hoped to bring together all the values, ideals, and beliefs that had informed her earlier work.Daniel Deronda has been called the first international novel. Eliot takes the reader to London, Paris, Prague, Vienna, Rome, Frankfurt, Hamburg, Mainz, Genoa, Trieste, Beirut, Sardinia, Corsica, Ajaccio, Palestine, and New York-a globe-hopping journey that in itself makesDeronda unique among Eliot's novels.

This is also Eliot's most original novel in its construction, one of the earliest examples in English prose fiction of what would become the hallmark of much modern literature: the replacement of the straightforward, linear plot-beginning, middle, end-with a disrupted, nonlinear plot that depends on both flashbacks and flash-forwards. Its mixture of social satire and moral searching, along with a sympathetic rendering of Jewish proto-Zionist and Kabbalistic ideas, has made it a controversial final statement of one of the greatest of Victorian novelists.

This new edition ofDaniel Deronda is presented here with a selection of classic illustrations spanning several editions of the novels. There is also a link to a free full-length audio recording of the book.

She used a male pen name, she said, to ensure her works would be taken seriously. Female authors were published under their own names during Eliot's life, but she wanted to escape the stereotype of women only writing lighthearted romances. She also wished to have her fiction judged separately from her already extensive and widely known work as an editor and critic. An additional factor in her use of a pen name may have been a desire to shield her private life from public scrutiny and to prevent scandals attending her relationship with the married George Henry Lewes, with whom she lived for over 20 years.

Her 1872 work Middlemarch has been described by Martin Amis and Julian Barnes as the greatest novel in the English language.