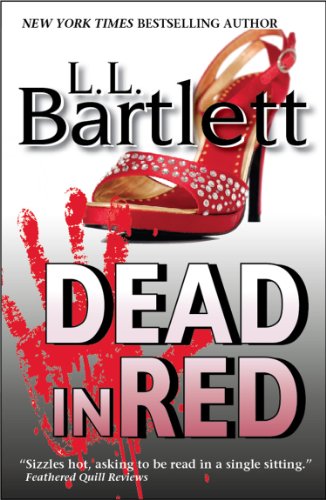 A sparkling red shoe and a bloody handprint define a man's death. Sometimes it seems like murder and mayhem follow Jeff Resnick, challenging his psychic "sixth sense" to solve crimes. Since the vicious mugging that changed his life, he's tried to keep his unwanted gift in check. But when a bartender at his favorite watering hole is murdered, visions of a sparkling red woman's high-heeled shoe and a pair of bloody hands linger in his mind--and hit too close to home. When Jeff's older brother, Richard, last helped him with an investigation, it nearly cost him his life. Still, Richard is determined to tag along as Jeff is drawn into the seamy world of fetishes and drag queens to find a murderer before another life is taken.

Praise for DEAD IN RED:

"DEAD IN RED is an engaging paranormal amateur sleuth starring a likable protagonist and his brother and brother's girlfriend who want him safe. The story line is fast-paced as Jeff seeks the dazzling red shoe that he believes will lead them to the culprit. Although the whodunit is well written and fun, as is Jeff's talent that seems to place them in trouble not keep them out of trouble, it is the relationship between the siblings that make this a special whodunit."
--Midwest Book Review

" If you like your murder served up with a touch of the unknown, Jeff Resnick will take you there."
-- Feathered Quill Reviews

"The brothers' complicated interactions carry the novel in this entertaining and lively mystery that contains sprinklings of the paranormal."
--No-Name Café

"Dead and Red takes the reader to the darker side of town and the darker regions of the mind. L.L. Bartlett gives mystery and suspense readers a unique eclectic mix of hard-edged characters and scenarios mixed with intimate, tender family moments. There is no guaranteed easy resolution or happily-ever-after summation but wow, what a wonderful ending! Now --- when is the next Jeff Resnick mystery out? I'm hooked."
--Book Illuminations

"Dead in Red succeeds as both an engrossing crime novel, and a story of a complicated relationship."
--CrimeSpace

"Bartlett's hero is complicated and mesmerizing, making for a gripping and energizing mystery."
~Booklist

About the Author: L.L. Bartlett has done it all--from drilling holes for NASA to typing scripts in Hollywood. She writes the Jeff Resnick mysteries. Bartlett also writes traditional mysteries under the name Lorraine Bartlett (The Victoria Square Mysteries--A Crafty Killing) and the New York Times bestselling (and Agatha-nominated) Booktown Mysteries as Lorna Barrett.

Dead In Red was originally published by Five Star/Cengage in 2008.

# # #
The Jeff Resnick Mystery Novels:
Murder On The Mind
Dead In Red
Room at the Inn
Cheated By Death
Bound By Suggestion Dark WatersShattered Spirits