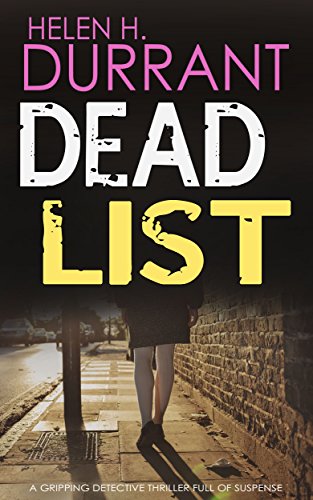 The latest brilliant mystery in the best-selling series, full of twists and turns "A great read. The murderer is a brilliant creation, shocking but also very human. This is the best book I've read by Helen Durrant yet. You won't be able to put it down." Emma Brown

An unlikely serial killer with a bucket list of victims . . .
Police partners, D.I. Calladine and D.S. Ruth Bayliss battle a murderer who is working their way through a list of victims. Each murder is meticulously planned and unique, and a tarot card is left at the scene of the crime.

When two children disappear in the local area, the stakes are raised and the team are baffled by the link between the crimes. Calladine and Bayliss race against time to prevent any more carnage.

If you like Angela Marsons, Rachel Abbott, Mel Sherratt, Ruth Rendell, or Mark Billingham you will be gripped by this exciting new crime fiction writer.

DEAD LIST is book three of a new series of detective thrillers featuring D.S. Ruth Bayliss and D.I. Tom Calladine. Calladine discovers shocking new information on his complicated family background and Ruth has some surprising news for him. A new detective, Stephen Greco, also come onto the scene, provoking competition with Calladine.

Tom Calladine is a single, fifty-one-year-old detective inspector who is devoted to his job. His personal life, however, is not so successful. Having been married and divorced before the age of twenty-one has set a pattern that he finds difficult to escape.

Ruth Bayliss is in her mid-thirties, plain-speaking but loyal. She wishes she had more time for the gym and a love life. She uses her demanding workload as an excuse not to try too hard with the men she meets. Her hobby is birdwatching.

The series is set in the fictional village of Leesdon on the outskirts of an industrial northern English city. There is little work and a lot of crime. The bane of Calladine's life is the Hobfield housing estate, breeding ground to all that is wrong with the area that he calls home.

ALSO AVAILABLE BY HELEN H. DURRANT
DEAD WRONG, book one featuring Detectives Bayliss and Calladine is available now!
"A bag of severed fingers is found in the playground by a rough housing estate.

DEAD SILENT is book two in the Calladine & Bayliss series.
A body is found in a car crash, but the victim was already dead . . . Police partners D.I. Calladine and D.S. Ruth Bayliss race against time to catch a vicious serial killer.

DARK MURDER DI GRECO book one
A woman is found dead by a canal . . . why have her eyes have been viciously poked out? Detective Stephen Greco has just started a new job at Oldston CID and now he faces a series of murders with seemingly no connection but the brutal disfigurement of the victims.

The books are set in the area in which Helen both lives and works. So she knows it well. It is an area in the North West of England that sits between two counties and between the city and the hills. So it offers a rich mix of the industrial and the countryside and all the character therein.