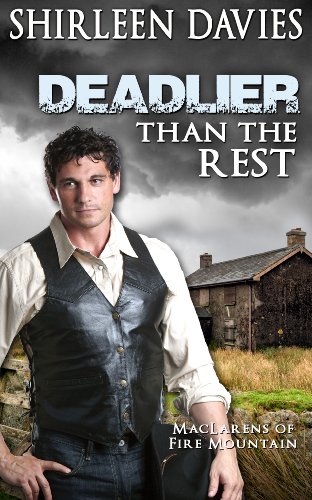 Deadlier than the Rest (MacLarens of Fire Mountain Book 5)

“A passionate, heartwarming story of the iconic MacLarens of Fire Mountain. This captivating historical western romance grabs your attention from the start with an engrossing story encompassing two romances set against the rugged backdrop of the burgeoning western frontier.”

Connor MacLaren’s search has already stolen eight years of his life. Now he close to finding what he seeks—Meggie, his missing sister. His quest leads him to the growing city of Salt Lake and an encounter with the most captivating woman he has ever met.

Grace is the third wife of a Mormon farmer, forced into a life far different from what she’d have chosen. Her independent spirit longs for choices governed only by her own heart and mind. To achieve her dreams, she must hide behind secrets and half-truths, even as her heart pulls her towards the ruggedly handsome Connor.

Known as cool and uncompromising, Connor MacLaren lives by a few, firm rules that have served him well and kept him alive. However, danger stalks Connor, even to the front range of the beautiful Wasatch Mountains, threatening those he cares about and impacting his ability to find his sister.

Can Connor protect himself from those who seek his death? Will his eight year search lead him to his sister while unlocking the secrets he knows are held tight within Grace, the woman who has captured his heart?

Read this heartening story of duty, honor, passion, and love in book five of the MacLarens of Fire Mountain series.

Deadlier than the Rest is a full length novel with an HEA.

From the Author
Join Shirleen Davies’ Newsletter to Receive Notice of:
•New Releases
•Contest
•Free Reads & Sneak Peeks
To sign up copy and paste this site address into your browser's address bar: http://bit.ly/1KqhKwm

“Whoa there, sweetheart, before you hurt yourself.” Strong hands gripped her upper arms, keeping her upright. Without his help she would’ve bounced back and off the wooden walkway.
“Let go of me,” she snapped and tried to pull away, but his grip held.
“Well, I can do that but not until you apologize for almost running me down,” Connor replied. He’d recognized her in an instant with her red hair and violet blue eyes.
“Apologize? Are you daft? You’re the one who ran into me,” she stormed, twisting her body from one side to the other, trying to free herself.
“Is that so?” His deep, soft voice floated over her just as it had in her dreams of him last night. He stared at her another moment then loosened his hold and stepped back.

Connor followed her up the narrow steps to her place, carrying her small bag, and set it down on the floor inside.
“You going to be okay here tonight?”
She slipped off her coat and hung it on a nearby hook. Grace wanted to be alone but didn’t want him to leave. Her heart told her to walk up to him, lace her arms around his neck, and ask him to stay. She shouldn’t. She was still married and it would be wrong, even if her marriage was a mockery. She planned to obtain a divorce, which was simple to do in Utah. The laws were lenient and divorce common with people coming from other states to take advantage of the quick dissolution procedures. She simply hadn’t had time to do it with work and planning how she was going to free Meggie.
Grace walked to a window and stared at the dark sky, deciding what to do. She needed to tell him about Moser but the words wouldn’t form. Say something tonight, or let him leave—she was conflicted. She continued to look out when she sensed him walk up behind her, felt his strong arms wrap around her waist, and draw her flush against his chest.
He pulled loose strands of hair away from her neck, bending to place kisses up to the tender spot behind her ear. “Ask me to stay,” he whispered before tugging a sensitive earlobe with his lips. She sagged against him, letting her head fall back against his chest and giving him access to the soft column of her neck.