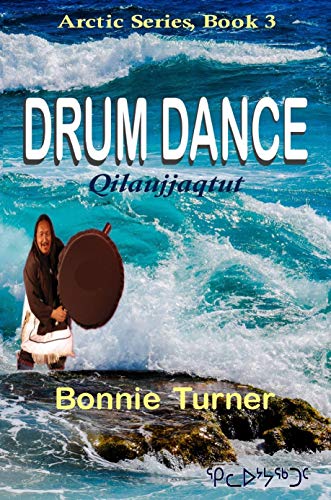 SET IN THE LAND OF THE MIDNIGHT SUN, Drum Dance is filled with action, adventure, paranormal intrigue, and danger in Canada's Central Arctic where Sir John Franklin and his crew froze to death searching for the Northwest Passage.

In the late 1930s, 17-year-old David Jansson agrees to spend two years at an isolated fur-trading post with his estranged father, Per, manager for the Hudson's Bay Company. Soon regretting his decision to resume a relationship with his dad, who is not the loving father he remembers-he has become a raging, abusive alcoholic-David foolishly risks his life when he forgets that the Arctic seldom gives a man a second chance.

"Birchbark canoes are made for rivers and lakes," Per said,"not the icy waters of the Arctic. Fall out of this, you'll freeze before you drown!" (Young Adult, Historical Fiction)

BILLED AS A YOUNG-ADULT, COMING-OF-AGE STORY, Bonnie Turner's novel deals with some pretty mature adult themes. Packed with action and adventure and set in the Canadian Arctic in the late 1930s, the intriguing plot blends Inuit traditions with the external conflicts between a seventeen-year-old Canadian, David Jansson, and his despotic forty-one-year-old father, Per, while they simultaneously struggle against their own inner demons. And while David finds solace in memories of and visitations from his dead mother, his father sinks ever deeper into alcoholic degradation.

A companion volume to Turner's earlier children's novel, Spirit Lights, the well-researched Drum Dance cleverly interweaves just enough Arctic history, place names, and Inuit language to evoke the culture of the north, the traditions of Eskimo storytelling, and the hardships of Arctic living, especially during 1938 and 1939. For that two-year span David pledges with his estranged father to leave the Peace River home he shares with his maternal aunt and uncle and to come live with his dad in Gjoa Haven where Per manages the Hudson Bay Company trading post. Here the Netsilik stories of explorers Roald Amundsen and Sir John Franklin abound, and the festivities of the drum dances for occasions, including the arrival of the supply ship, relieve the tedium of time and the ravages of weather.

As the two become reacquainted, David's favorable boyhood memories of his dad are shattered as Per, fuelled by contraband whiskey and rum, becomes increasingly abusive to his son. To add to Per's anger, David, known to the Inuit as "Krek" (White Hair), has been willingly seduced by a local girl, Nipesha, and fallen under the spell of Naigo, the resident Shaman. Rebelling against his father's abuse, especially when he uncovers a secret about his mother's death and Per's current sexual intimacy with Nipesha, David rashly decides to escape Gjoa Haven by canoe. But he is forcibly joined by a half-crazed companion laden with a rifle and troubles of his own. Their harrowing adventures, both earthly and supernatural, make for a gripping read, including Krek's near-death experiences when "Supernatural forces swept David's spirit through a long, dark tunnel, where cosmic winds howled and distant drums throbbed."

Turner's memorable characters are well-motivated, the plot is well-structured, suspense is well-drawn out, and the story's conclusion is believable but fairly predictable. There are no typos nor grammar gremlins, and the book's design, cover, and map of the region are all of very high quality. Turner's objective treatment of sensitive issues, such as promiscuity and wife-swapping by the Inuit, reflects a cultural tradition in a non-judgmental way. But while her overarching chronology for the span of the book is solid, the time lines for some episodes and back stories could be more firmly reinforced by the inclusion of dates or specific times. ~M. Wayne Cunningham