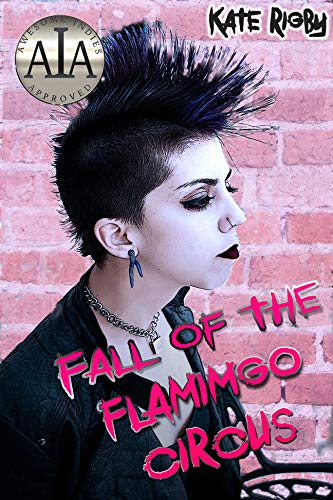 Fall Of The Flamingo Circus: Diary Of A Punk

“Fall Of The Flamingo Circus is the story of a strong and independent girl’s childhood and adolescence, her desperate battle to make something of the fearful hand dealt to her. Through her eyes we see the realities of poverty in England – hunger and junk food, boredom and noise at home, snobbery and notoriety at school – and the fear of a brutal father…over the years we watch Lauren’s voice grow in power and imagination, as her life – a rebel, a punk, admired by her gang but rejected and victimised by men – bursts out of its sad confines…but Lauren is always alone with her restless and furious self: she alone will discover the pain and loneliness of being different, crazy, colourful in an England turned grey, obedient and satisfied.” Back cover blurb, paperback, published 1990

Andrew Sinclair, Times reviewer (1988) said of Lauren: 'Holden Caulfield from Catcher In The Rye would have been able to talk to her, straight.'

Also described as as 'On the Road for Punks' by one Amazon reviewer.