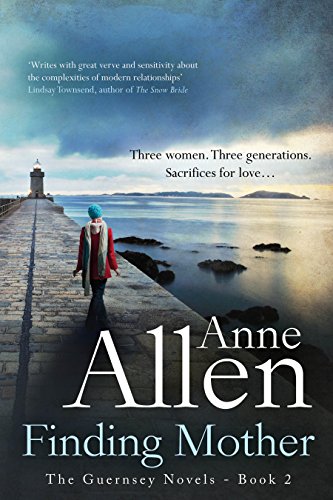 This romantic drama is the second ofThe Guernsey Novels, a series of stand-alone books by theaward-winning author Anne Allen. It will appeal to fans of the best-selling novelThe Guernsey Literary and Potato Peel Pie Society.

Who is she really? Nicole is about to find out as she searches for herreal mother; the woman who gave her away at birth. With her marriage in tatters, she sets out from England: travelling to Spain, Jersey and Guernsey before theextraordinary story of her real family is finally revealed.

Nicole becomes an unwitting catalyst for change in that family. Two women are forced to reveallong-buried secrets. One going back as far as theSecond World War. Lives are transformed as choices have to be made and the past laid to rest…

"I first encountered Anne Allen when I read Dangerous Waters: Mystery, Loss and Love on the Island of Guernsey and if you've read that book you'll notice a glancing reference to Jeanne, the heroine, in Finding Mother. I felt nicely grounded! In much the same way that Allen wormed Jeanne into my heart, I really found that I cared for Nicole and willing her on to make the right decisions and a success of her life.Allen has a real talent for her female characters. The men don't come off the page quite as well, but that's a minor quibble. Tracing a birth parent when you've been adopted is a sensitive subject and Allen handles it well, recognising the insecurities of the adopting parents who wonder if they're going to be supplanted and the worries of the mother who gave up the child soon after her birth. Will she be judged for her relationship with the child's father and for the fact that she made no attempt to bring the child up herself? There's an added complication here in that Nicole will also find out about her birth father - giving her more parents than any girl should decently want! It's neatly, elegantly done andthe story is a real page-turner." The Bookbag ****