Fiona Tankard is a professional British writer and ghostwriter. She writes children's books, non fiction books and all kinds of other stuff on the web. She has somehow managed to spend the last 22 years in Italy, first Umbria then Tuscany.

Always a lover of fantasy, adventure and magic, she wrote her first book about a space expedition, Molarta 570, when she was eight. It was a roaring success with her little friends who appreciated its intriguing cast of animals and girls and its splendid lack of grown ups and boys.

Spurred on by this, Fiona did a degree in English and American Literature at Warwick University, followed by a PGCE at Southampton University and a Dip TEFLA (no, that is not something you dunk sheep in, but a language teaching qualification). By that time she had discovered that boys were actually quite interesting, and thus got far too distracted to fulfill her early potential.

After a career in English Language teacher training in Bournemouth, Fiona met fellow teacher Alan, got married and went off to live in a ruined farmhouse in Umbria, Italy, taking their motley collection of dogs and cats along for the ride.

There followed a couple of decades of building, teaching, writing, the creation of the UK best selling glossy magazine ITALY, more building, writing and ghostwriting, including an Amazon best seller. There was a worrying increase in animal companions, very often with a bit missing.

Fiona decided in 2012 that she needed to investigate the woolly pyramid scheme that is alpaca breeding and so bought some pregnant females. This was rapidly followed by a crash course in alpaca midwifery (stand in field holding rubber gloves and looking helpless) and the sad realization that she could never sell them (far too cute), so she would “Focus on Fiber”. This led to learning spinning and weaving and making some strange scarves. Her total fiber sales so far are $20 of suri alpaca fleece to a Latvian doll maker for hair (for the dolls, not for him), $5 of which was postage.

The star of Fiona's latest book Ruby and the Ghost Dog is Gaspare, an English Setter she rescued in 2009. Thankfully he is not a ghost and lives happily with Fiona's other rescue dog Mana' (named after the Polynesian god of universal energy), kitten Misty and seven alpacas.

Fiona welcomes feedback from readers and is also happy to talk to reading groups, school teachers and school children from all over the world. Please get in touch! 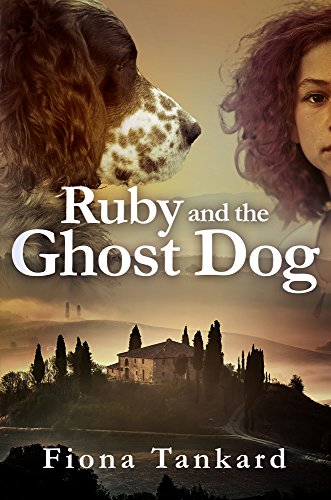 Ruby and the Ghost Dog

A beautiful supernatural story about a young girl and a ghost English Setter, perfect for young (and not so young) dog lovers
Eleven-year-old Ruby Copperthorne has terrible dress sense, is crazy about animals, whistles when she's scared and sees strange things that other people can't. She has just moved to Italy with her mum and she absolutely does not want to be there. If you ask Ruby, there is nothing good about living in another country, except she may be able to get a dog and she might stop meeting ghosts.