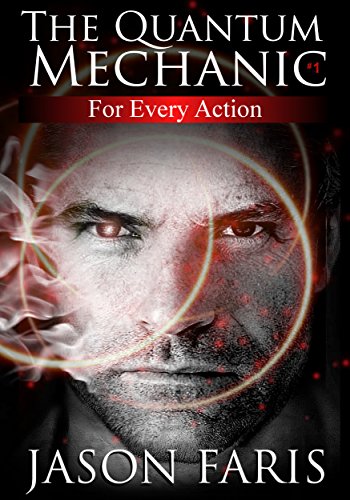 For Every Action: The Quantum Mechanic Series Book 1

From an early age everyone knew that Jacob Saylor was different…

Even as a child he possessed mental abilities that rivaled even the world's most advanced intellects. Abilities that revealed to him a pattern underlying all things, a potential answer to all of life's greatest mysteries and a path to unification with the divine. So as a rash and impulsive young man he runs away into the shadows of the Middle East's religiously fueled wars, determined to find answers.

But when he and his Army Ranger brother travel into the desert to locate the final missing piece - they inexplicably vanish... only to reappear nearly two years later in a small Tajik village, horribly scarred and unable to remember where they have been. When he finally returns home to America, the man who was once the world's most promising scientific mind is broken, plagued by madness and completely shattered by an experience he cannot recall.

Then Jacob discovers that fate has not finished with him... Over the course of the next decade something grows inside him, a power so terrible that he must learn to master it before he accidentally shreds the very fabric of reality. A dangerous gift that the world will desperately need - for a horrifying conflict is coming. A cataclysmic war against cybernetic monsters spawned from our darkest and most terrifying nightmares.

In the end mankind's only hope will rest in the hands of a haunted and broken man. One who will have to face the consequences of tampering in God's domain. The only person who can possibly be what the world will so desperately need...

For Every Action carries us to a near-future filled with technology gone mad.
The tale of young prodigy Jacob Saylor, who dares to lift the hood on the engine of God's creation... and is transformed against his will into something far greater than human. An enigmatic figure thrust into an apocalyptic battle against a rogue nation's army of cybernetic monsters.

Exciting and thought-provoking, a 21st century epic reminiscent of many of Science Fiction's greatest authors, Faris's extraordinary first novel is the ideal marriage of scientific and
metaphysical speculation wrapped around a breathtaking adventure
that never stops moving.

Jason currently lives in Kentucky with his very patient wife, several children, and one small and incredibly neurotic dog. He is currently without an agent and is considering offers. Printed copies of The Quantum Mechanic series can also be obtained through the Quantum Mechanic website.