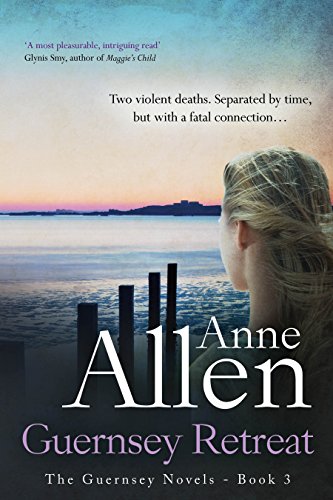 £2.99
Share on Facebook
Share on Tweeter
"Murder, mystery, and romance - it's got it all."
The third inThe Guernsey Novels series, likely to appeal to fans of the best-selling bookThe Guernsey Literary and Potato Peel Pie Society.


Two violent deaths. Separated by time, but with a fatal connection…

A man loses his father. A young woman loses her mother. Both in tragic circumstances that lead, when they meet, tosurprising revelations from the past.

Louisa needs to find the father she has never known, to warn him of possibledanger- for them both. Her search takes her from England to Guernsey. Malcolm's journey is more complicated: conceived in Guernsey, his bereaved mother emigrates with him to Canada. Many years later he arrives in India, and from here he is led back to Guernsey to open a health centre at La Folie. This was his father's home and where he was killed at the start of theSecond World War.

At the heart of the two deaths liestolen jewels. Valuable enough to kill for. Twice.

Finding her father brings Louisa more than she bargains for, andher life is transformed, while Malcolm learns that life is, after all, for sharing…


"I regard Anne Allen's Guernsey novels as anindulgent treat: they're seriously easy to read, with some great characters and a brilliant island location which is used to full advantage: you really feel as though you're there. Allen has a subtleinsight into the dynamics of dysfunctional families- the ones with quirks in their history - and the independent people they give birth to. She doesn't fall into the obvious trap of creating unhappiness within the families: both Malcolm and Louisa loved their mothers dearly and grew to be strong people themselves. The hint that their upbringing has left its mark is shown by the fact that Malcolm has never married - and Louisa finds it difficult to believe that the man who hasstolen her heart- the manager of Malcolm's health spa - could reciprocate her feelings. There's a neat mirroring of circumstances with both Malcolm and Louisa having a parent killed in the search for the jewels.
There's considerable insight too in the relationship between Malcolm and Louisa. Louisa has always known that she had a father, but Malcolm knew nothing of the existence of Louisa until he was confronted by her. There's a wariness on both sides at first, followed by a steady growth of affection rather than insta-love and it's a relationship you can believe in.
Whenever I read one of Anne Allen's books I'm always disappointed when I turn the final page:the books lift me out of reality and whisk me away to somewhere warm and comfortable." BOOKBAG ****