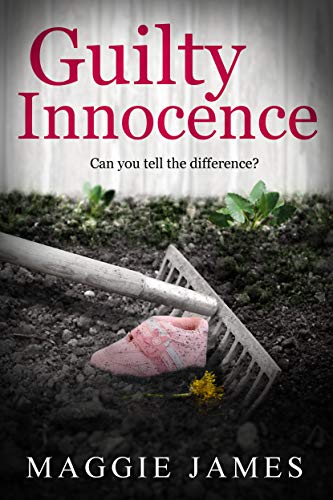 Guilt or innocence - can you tell the difference?

A murder that shocked the nation.

Ten years after being convicted of the brutal killing of a toddler, Mark Slater, formerly Joshua Barker, is released on parole from prison. Only the other boy jointly sentenced for Abby Morgan’s murder, the twisted and violent Adam Campbell, knows the truth. That Mark played no part in Abby’s death.

Four years later, Mark’s on-off girlfriend discovers a letter revealing his conviction as a child killer. At risk of having his protective cover blown, Mark’s need to confront the injustice of his sentence becomes overwhelming. Meanwhile, circumstances have thrust Mark back in contact with Adam Campbell, who has become even more domineering and chilling. Can Mark rewrite history and confront his nemesis?

A gritty novel examining child murder and dysfunctional familes, Guilty Innocence tells of one man's struggle to break free from his past.

Maggie James is a British author who lives near Newcastle-upon-Tyne. She writes psychological suspense novels.

Before turning her hand to writing, Maggie worked mainly as an accountant, with a diversion into practising as a nutritional therapist. Diet and health remain high on her list of interests, along with travel. Accountancy does not, but then it never did. The urge to pack a bag and go off travelling is always lurking in the background! When not writing, going to the gym, practising yoga or travelling, Maggie can be found seeking new four-legged friends to pet; animals are a lifelong love!