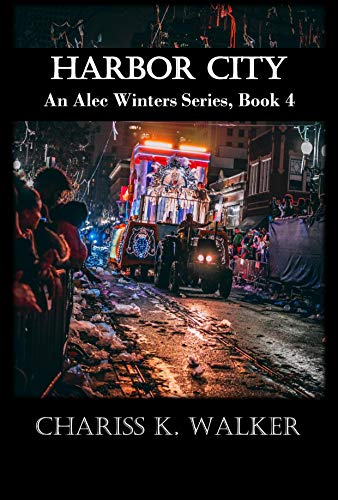 Harbor City is the fourth book in An Alec Winters Series and the conclusion to the story which began when 17 year old Alec walked in on his father who was sexually molesting his younger sister, Catalina. Alec's ensuing rage and desire for retribution took over and was the catalyst that propelled Alec into his supernatural transformation to angel and demon - A protector of innocent victims and a "punisher" of those who hurt them.
The series begins with Prelude, a prequel to Crescent City (An Alec Winters Series, Book 2) and shares a behind-the-scenes look at Alec as a New Orleans teen-jock, before that fateful night of preternatural change. Prelude gives little-known facts about Alec's relationship with Sabrina and Chaz. Was the Winters' secret family instrumental in changing Alec's life or was it his destiny?
This dark-urban-fantasy thriller tells Alec's controversial story as angel and demon on the gritty streets of New Orleans in Crescent City, Mobile Alabama in Port City, and Melbourne Florida in Harbor City, the last installment in this emotionally-charged 4-book series.
Author's Warning: Dark fiction story - deals with elements of fear, death, and the darkest side of life. Not for the faint of heart, not recommended for those under the age of 17.
Fans of the television series Supernatural and Constantine will enjoy An Alec Winters Series.


Author's Warning: Dark fiction story - emotional triggers - deals with elements of fear, death, and the dark side of life.
Some see Alec Winters as a breathtaking, amazing angel, a savior. Others see him as a mind-blowing nightmare, the most terrifying demon their minds could ever conjure. An Alec Winters Series is a dark-fiction, vengeance-driven 4-book thriller series, beginning with Prelude, a behind-the-scenes look at Alec's life as a New Orleans teen-jock. In Crescent City, Alec rescues innocent victims and crushes the loathsome, corrupt men responsible for their suffering. In Port City, Alec's job took him to Mobile, Alabama...and now, he travels to Melbourne, Florida in the final installment, Harbor City. Finish Alec's controversial story in this emotionally-charged series -- you won't want to miss the ending. Not for the faint of heart; not recommended for those under the age of 17.
Fans of the TV series, Supernatural, will enjoy this series.