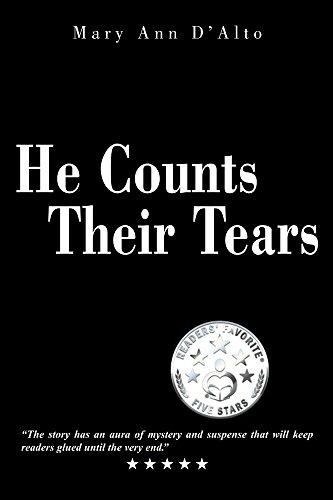 He Counts Their Tears

A handsome, successful, charming man. Healer. Miracle maker. Aaron Stein is all those things. Behind the benevolent façade, however, hides a monster: a destroyer of souls who lusts after power and control. Aaron plays his ruse again and again with unsuspecting women who genuinely believe that they have met their new "best friend", their "soul mate". Covert hypnosis, edgy trysts, psychological warfare - they're all part of the sick game he plays "to have all the power"
…until his secret life is threatened by a series of events he never sees coming. Will his devoted cousin, Constance, succeed in protecting him, just as she has throughout his entire life? And what exactly is it that she does to protect him? Is she a murderer, or is she simply devoted to him? Are they merely cousins (possibly, once, long ago, lovers), or are they partners in crime? Did Aaron learn his evil ways from her, or was he born a psychopath? In the end, these answers will make no difference in the lives of the women who, each in turn, are charmed into becoming his victims.

"I was the little girl who never played with dolls.  How could I?  They were the characters in the horror stories I made up in my mind."

Mary Ann D'Alto graduated from Barnard College with a degree in art history and a rather large box of journals filled with short stories and poetry penned in between classes.  She has advanced degrees from Columbia University, and a Juris Doctor. A former Administrative Law Judge, Marty Ann now owns her own law firm.  Her golf clubs gather dust as she is busy writing most week-end mornings, only venturing outside to walk her dachshund,  Rocco.