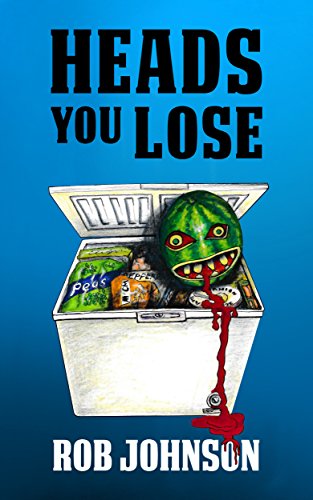 The assignment in Greece might have been the answer to Trevor and Sandra's problems except for one thing. Someone was trying to frame them for murder... with a watermelon.

'Money for old rope,' Sandra had said when they accepted the job of looking after the ageing Marcus Ingleby at his villa in Greece, but when a neighbour brings a gift for the old man, the prospect of spending most of the rest of their lives in a Greek prison becomes a terrifying reality.

Meanwhile, Ingleby has problems of his own. During his seventy-odd years, his cupboard has accumulated plenty of skeletons, one of which is about to be rattled by a couple of ex-cons and a retired police inspector from his murky past.

Heads You Lose is the sequel toLifting the Lid and the second book in the 'Lifting the Lid' series, featuring Sandra Gray, Trevor Hawkins and his incorrigible dog, Milly.

Some Reviews of 'Lifting the Lid' (Book One in the Series):
"A superb adventure-comedy... Lifting the Lid will grab you and pull you along for a fun and wild ride... The story was fast-paced, and the light-hearted style keeps you smiling. The characters are lively and intriguing. They leave you wanting to read more about them and their zany lives... I can't wait for the sequel!" - Reviewed by Jennifer Reinoehl forReaders' Favorite

"It's brilliant!... You go from one hilarious, life threatening scene to the next and you'll never know where it's going. You'll laugh so hard, you'll have to make a couple trips to the restroom... The writing is fast paced, funny and downright thrilling." - Samantha Coville forSammytheBookworm.com

"The story is just so much FUN! It is entertaining, well-written, cleverly planned and expertly timed... Johnson gives his reader variety in mood, pace, setting and dialogue, never giving them a chance to become bored or to be able to predict where the story is heading." - Joanne Armstrong forIngrid Hall Reviews

‘You’ll have to write an author biography of course.’

‘Because people will want to know something about you before they lash out on buying one of your books.’

‘For a start, you should mention that you’ve written four plays that were professionally produced and toured throughout the UK.’

‘Should I say anything about all the temp jobs I had, like working in the towels and linens stockroom at Debenhams or as a fitter’s mate in a perfume factory?’

‘You were sacked weren’t you?’

‘Boss said he could get a truck there quicker.’

‘Leave it out then, but make sure they know that A Kilo of String is the fourth book you’ve written.’

‘It’s very different from the other three. They’re all novels for a start.’

‘Doesn’t matter. And don’t forget to put in something that shows you’re vaguely human.’

‘You mean this kind of thing: “I’m currently in Greece with my wife, Penny, two cats and five rescue dogs and working on a fourth novel and a couple of screenplays”.’

‘It’ll have to do, I suppose, and then finish off with your website and social media stuff.’