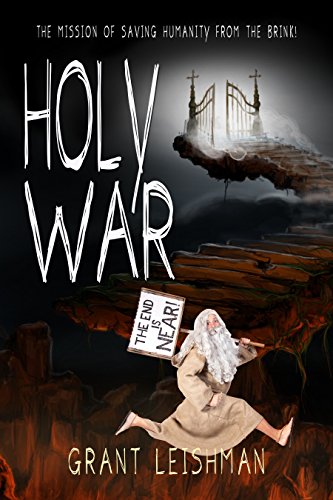 Holy War (The Battle For Souls): The Mission Of Saving Humanity From The Brink (The Second Coming Book 3)

The final installment in The Second Coming Trilogy sees JC, his wife Maria and their loyal band of Disciples confront the forces of Evil, in an all-out battle for the minds, hearts and souls of a generation.

Beelzebub has escaped the pits of Hades and raised an AntiChrist, in the form of JC and Maria's daughter, Samantha. Together, aided by Beelzebub's army of ancient Gods they will battle the Hosts of Heaven in the ultimate quest of Good versus Evil. Beelzebub seeks dominion over humanity and ultimately the Universe.

The ultimate battle for humanity's subservience will stretch across the globe, culminating in that most historic and holy cities of Jerusalem. At the Church of the Holy Sepulchre and the Dome of the Mount, humanity's future will be decided once and for all.

Is this Armageddon? This gripping, fantasy, adventure, is a real page-turner, that will keep you on the edge of your chairs, until the final climactic scene.