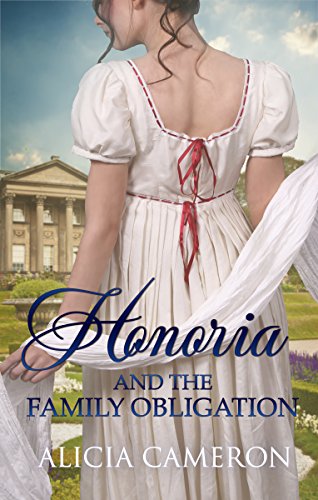 Honoria and the Family Obligation

Take two beautiful sisters and three eligible suitors - add mistaken identity and you have a sparkling romance.
Honoria is the shy sister - who would have thought she could land in quite as big a scrape as the audacious Serena?
When the eligible Mr Allison is to come to Fenton Manor to woo Honoria, there is a problem. She doesn't remember what he looked like. Crippled by her timidity, she hardly looked at him when they'd met during her first London season. But he had spoken to her father, determined to ask her for her hand. Her siblings, Serena and Benedict find this highly amusing, but after Honoria overhears a conversation between her parents about their finances she realises she must marry Mr Allison, and this constraint leaves her martyred and unhappy and unable to share her feelings.
When Mr Allison arrives, there is another problem. One to do with her sister Serena.
Mr Allison, (annoyingly handsome and kind) fails to propose as expected and leaves abruptly - but invites the confused family to stay at Bassington Hall, his own country home. His kindness to all her family leaves Honoria with no legitimate excuse to escape marriage. Mr Scribster, his ugly, unpleasant, unfeeling friend, guesses more than she would like and offers Honoria a place to concentrate her dislike and frustration.
Meanwhile Benedict embarks on an adventure with his rogue of an uncle, Wilbert, to save his childhood friend and neighbour Genevieve Horton who has become the unhappy Lady Sumner. By learning some scandalous skills Benedict hopes to give some options to the most trapped figure in all of polite society - an unhappy wife.
When Benedict's life hangs in the balance all the major players are changed forever and the tangle of romance is finally resolved.
Alicia Cameron's first novel, Clarissa and the Poor Relations, has been highly regarded, reaching the top ten in historical romance on Amazon.com (with 90 reviews), and #1 in Amazon.fr. It is newly available in a Spanish translation.
What people say about Alicia Cameron's previous novel:

(Alicia Cameron) is '...a worthy successor to Georgette Heyer'
'Full of wit and imagination'
'…an authentic Regency voice'
'Definitely felt like reading Jane Austen'
'An episode of Friends set in the 1800s'
'Wouldn't we all like to be invited?'
'Full of wit and romance like an old, old, movie directed by Preston Sturges.'
'A witty, light-hearted cross between Georgette Heyer and Oscar Wilde!'