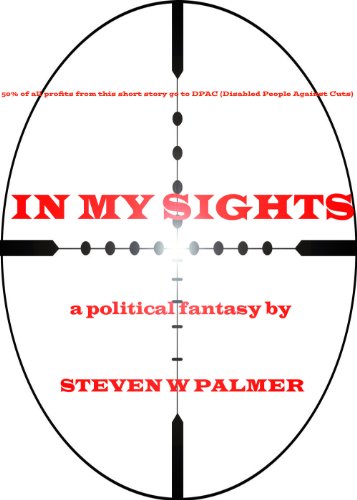 In My Sights; A Political Thriller (The Danny Cleland Adventures Book 1)

Danny Cleland has just returned from Afghanistan. Army life is behind him now after 22 years in the Paras and the SAS. He's looking forward to spending time with his family and adjusting to civilian life. What he finds is his mother in the depths of depression due to the callous and uncaring policies of a selfish government, and due to the methods employed by their lapdogs ATOS. Ill thought out judgments lead to tragic consequences, and Danny realises the country he once loved is in a mess. He's on the edge of reason and sanity, but what will he do next?

*PLEASE NOTE; 50% OF ALL ROYALTIES GOES TO DPAC (DISABLED PEOPLE AGAINST CUTS - http://dpac.uk.net/ - A WONDERFUL ORGANISATION GIVING HELP AND ADVICE TO DISABLED PEOPLE IN THE UK AFFECTED BY THE CUTS MENTIONED IN THIS STORY*

Steven W. Palmer is the pen name of Scottish expat, Iain Donnelly, who has been living in Cambodia for 4 years.

He started writing as a freelancer for the Phnom Penh arts and entertainment magazine, The Advisor. Shortly after The Advisor folded he was headhunted as writer and assistant editor for The Weekly, part of The Khmer Times. But within a few weeks his friend and editor had walked out and he was thrust into the position of editor and chief writer. With no support from the publisher he soldiered on but the clock was always ticking and he left at the end of 2015.

After a couple of months' hiatus, he was offered the post of managing editor with an international advertising and publications agency, and took the reins of three magazines; European Auto Asia, Travel and Tourism Guide Cambodia, and Banking & Finance Cambodia.

He set up Saraswati Publishing Cambodia towards the end of 2016 with the purpose of not only publishing his own books, but also books by other expats in the country and, more importantly, discovering new Cambodian writers and giving them a publishing platform.

As Iain, he has just edited a collection of short stories, Mekong Shadows, which is already receiving great acclaim. As well as established expat and Cambodian writers, the book also features two competition winners, aged 15 and 18.

As well as writing, Steven is a keen DJ and music producer who writes weird and quirky electronic music.

In what little spare time he has, Steven likes to work on a plan to resurrect Genghis Khan and also trains stunt hamsters.