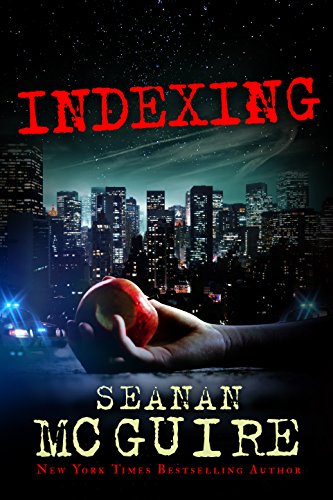 "Never underestimate the power of a good story."

Good advice…especially when a story can kill you.

For most people, the story of their lives is just that: the accumulation of time, encounters, and actions into a cohesive whole. But for an unfortunate few, that day-to-day existence is affected-perhaps infected is a better word-by memetic incursion: where fairy tale narratives become reality, often with disastrous results.

That's where the ATI Management Bureau steps in, an organization tasked with protecting the world from fairy tales, even while most of their agents are struggling to keep their own fantastic archetypes from taking over their lives. When you're dealing with storybook narratives in the real world, it doesn't matter if you're Snow White, Sleeping Beauty, or the Wicked Queen: no one gets a happily ever after.

Indexing isNew York Times bestselling author Seanan McGuire's new urban fantasy where everything you thought you knew about fairy tales gets turned on its head.

This book was initially released in episodes as a Kindle Serial. All episodes are now available for immediate download as a complete book. Learn more about Kindle Serials

Seanan McGuire is a native Californian, which has resulted in her being exceedingly laid-back about venomous wildlife, and terrified of weather. When not writing urban fantasy (as herself) and science fiction thrillers (as Mira Grant), she likes to watch way too many horror movies, wander around in swamps, record albums of original music, and harass her cats.

Seanan is the author of the October Daye, InCryptid, and Indexing series of urban fantasies; the Newsflesh trilogy; the Parasitology duology; and the "Velveteen vs." superhero shorts. Her cats, Lilly, Alice, and Thomas, are plotting world domination even as we speak, but are easily distracted by feathers on sticks, so mankind is probably safe. For now.

Seanan's favorite things include the X-Men, folklore, and the Black Death. No, seriously. She writes all biographies in the third person, because it's easier that way.