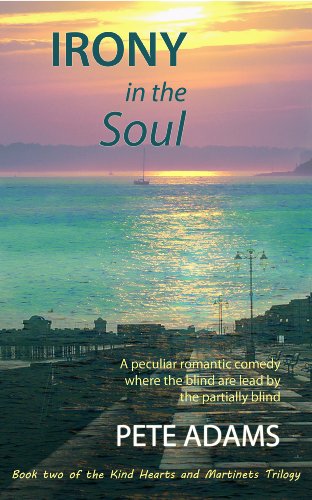 Irony in the Soul (Kind Hearts and Martinets Book 2)

It is a tongue in cheek conspiracy and a humorous love story that threads a path through political intrigue, murder and human frailty.

Book two, 'Irony in the Soul' - DCI Jack (Jane) Austin died following the rescue of 17 children off a Solent fort. Now, back in the land of the living, the malevolent force codenamed Norafarty, will not allow him to rest; texting, a martyr has 72 virgins and God a new Angel. Police find an Imam crucified and a Priest stoned to death.
Against advice, Jack returns to work only to clash with the new Chief Constable, a Big Society retired Colonel who seems hell bent on confining Austin to petty investigations; Austin suspects military machinations, Pugwash? Amanda looks to the heavens and low, the Bishop answers her not so silent prayer. Amanda Bruce and Jack Austin have to juggle their blossoming love life and the strain of past traumas on the already emotionally disturbed Austin, with the need to find the Colonel. He's been kidnapped, his legs wrapped in brown paper and delivered to the police station, a note pinned to the bum of his city boy trousers. Is there a mole in the team?

More slaughters follow; a minister beheaded, a woman in Hijab staked out in the harbour and left to drown, but Jack appears indifferently distracted; Milk'O has agreed to the pink Tutu, though Alexander Pantsoff is unenthusiastic and what of Fee de Prune - will she be there? Strangely, Norafarty offers up the answers; Jack does not see this as odd at all, stating, "It's logical that Norafarty would help out - isn't it?"

Jack's Post Traumatic Stress Disorder is causing concern and consternation; is Jack the conspirator? As a known and committed socialist, is this all his game? He is certainly clever enough to conceive of such a plot and how ironic would that be?

Pete Adams is an architect living in Portsmouth, where he sets his books. With a writing style shaped by his Bermondsey and East-End of London family, Pete’s Kind Hearts and Martinets series of books have been likened to the writing of Tom Sharpe; crime thrillers that make you laugh, with a dash of social commentary. A Barrow Boy’s Cadenza is book 3; he’s currently writing book 8 – so, lots to come. Book 4, Ghost and Ragman Roll is out 1st November 2016 - Pete Adams book 3, A Barrow Boy's Cadenza and next book 4 Ghost and Ragman Roll, are Published by Urbane, who will also be re-issuing as Urbane Titles, in kindle and Paperback, book 1, Cause and Effect, and book 2, Irony in the Soul, early in 2017 (currently as sel;f published and only available in e-book format).