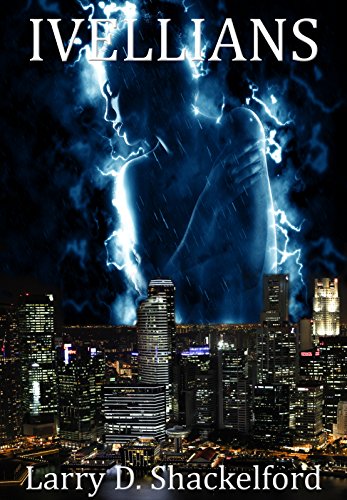 Ivellians is a fast-paced, science fiction romance story. The Ivellians possess human characteristics and have come to earth in a last effort to preserve their species. Unfortunately for the human race, the Ivellians are carnivorous and their soldiers feast on human flesh. Their ruthless leader, A'Vu, has commanded his soldiers to eliminate the human males and capture females and children. The Ivellian males believe their females are no longer capable of reproducing, so they intend to mate with the genetically comparable human females.

Gower Gee is an accomplished Drug Enforcement Agent who is struggling with his professional and personal lives. When the invasion begins, his commercial airplane inexplicably crashes near a small, secluded island in the Caribbean. He is one of only a handful of survivors who encounter a marooned Ivellian female, M'ala, who provides them with the key to eliminating the Ivellians. He is assisted by a unique cast of characters, which include a gay couple, responsible and pragmatic Michael and the flamboyant and endearing Jules. They are also accompanied by a beautiful school teacher, Sasha, and they collectively believe they will have a better chance of survival if they sail back to the United States. Before they reach land, they meet up with feisty Tabitha and another Ivellian female, P'upi, who assists them.

The castaways are alarmed by the unprecedented destruction they encounter when they arrive back in Miami. Time is running out. If the human race is going to survive, Gower realizes that he will have to sacrifice his life. His unselfish task will result in losing the woman of his dreams, Sasha, whom he has fallen deeply in love with. Gower embarks on a difficult journey to Washington, D.C., where he implements his plan, and he never imagined his efforts would end so tragically.