Former L.A. Times reporter Jack Getze is Fiction Editor for Anthony nominated Spinetingler Magazine, one of the internet's oldest websites for noir, crime and horror short stories. His award-winning Austin Carr mystery series is published by Down & Out Books. His latest, BIG SHOES, won Deadly Ink's David Award for Best Mystery of 2015. A new thriller series, featuring U.S. Air Force Lieutenant Colonel Maggie Black, begins August 7 with publication of THE BLACK KACHINA. His short fiction has appeared in A Twist of Noir, Beat to a Pulp, The Big Adios and several anthologies. If you'd like him to write another Austin Carr, let him know at http://austincarrscrimediary.blogspot.com 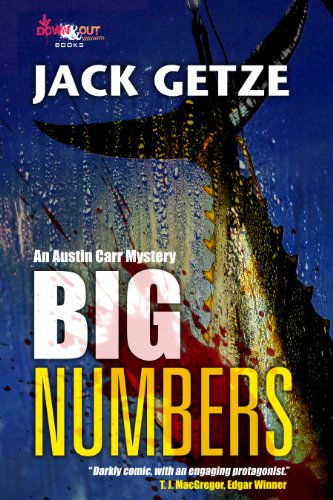 Wise-cracking stockbroker Austin Carr is about to be killed by an unknown man in an unusual fashion - dragged from a fishing boat to his watery grave by a giant bluefin tuna.Flashing back three weeks, Carr then recalls the events and bad choices that got him into his deadly predicament. We spend the book trying to guess the identity of the unknown man on the fishing boat; not an easy task because Carr's big mouth alienates about everyone he knows."Darkly comic, with an engaging protagonist." -- T.J. MacGregor, Edgar Winner, Author of The Tango Key Mysteries"Big Numbers is a gritty, sexy, violent, and funny book."-- Liz Clifford at Reviewed by Liz"Wonderful characters...well-written, entertaining...a good read."--Connie Anderson for Armchair Interviews "Jack Getze started his career as a newspaper reporter. As a result, BIG NUMBERS is lean and mean, with not a word wasted. A truly fun, genuinely funny read."--Lisa Guidarini for Bluestalking Reader