I was born in Hackney, London and grew up on the Bannister House Estate where my childhood seemed to be full of adventure. One day a film company arrived across the street from where I lived and shot part of a gangster movie. They transformed a shop front, then two stunt men fell through the glass window before gangsters arrived and shot the place to pieces. I was inspired!

At school My English teacher, Bernard Phillips, was always positive and encouraged me to be an avid reader. I enjoyed all kinds of fiction but mainly Crime. As the years rolled by I became more discerning.

The books were either too descriptive with little action, or too many characters that confused me. I now had more spare time on my hands, so I decided to cancel the SKY subscription and write one that appealed to my own personal taste. I watched countless documentaries and read fiction/non-fiction on the subjects of Organised Crime, the Mafia, Vice, Psychopaths and Policing.

I completed a creative writing course. Then I attended two workshops run by the Nottingham Writers Studio. Deborah Bailey led ‘Getting it out there’ and ‘How to interview your character’.

Angela K Foxwood took the second course ‘Developing your crime novel’. It was extremely useful and provided me with the tools I needed to shape my novel.

The first draft takes a few weeks. Then it’s a question of 3 months per subsequent draft. During the writing I will visit locations in London to add realism to the setting. My wife accompanies me and she has been very supportive.

When I feel happy with the final draft I send the manuscript to two amazing friends who have editorial experience. Tracie and Gill gave me so much of their time; suggesting changes when a paragraph didn’t seem to work, correcting my grammar and pointing out ‘Too many He’s or I’s’ etc.

Then when I’ve incorporated their corrections and observations I send the story to my reading circle. Clive, Sandra, Chris, David and Paul who gave great comments that improved the book even further.

A lot of my characters are based on old colleagues and acquaintances. My readers have enjoyed their own particular character in the book. Many have picked out the doorman, Norman, as one that could have his own series.

Many times I have been asked 'Have you wrote about a personal experience in your novels?'

The answer is Yes, there was one instance in Loose Cannon. The sequel has a few more.

Regarding research, I spent five years researching books, magazines, documentaries, movies and internet articles on various subjects (some I have mentioned before).

The locations, buildings and pubs in my novels are all visited so as to get an idea of their atmosphere, which I hope comes through in the novels. 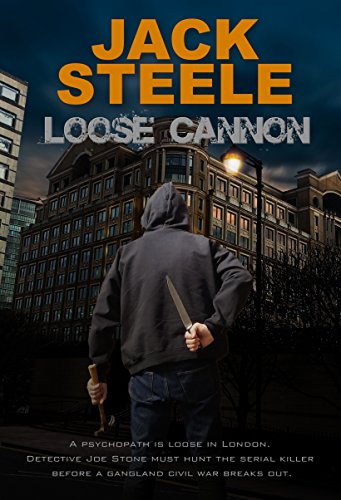 A psychopath is loose in London. Detective Joe Stone must hunt the serial killer before a gangland civil war breaks out.