Jason Ayres began his writing career at Primary School in 1979 with a 94 chapter epic space adventure. It featured the exploits of Captain Jason who bore more than a passing resemblance to a famous starship captain of the era. Sadly, the plot was just getting going when his teacher firmly suggested that he try writing about something else.

Never one to let the creative sap rest for long, by the mid 1980's he was furiously scribbling down plays in "spare" exercise books liberated from the stationery cupboard. These plays starred his classmates and girls he fancied in a number of outrageous and libellous scenarios. The plays have now been placed securely under lock and key with strict instructions never to release them to the general public.

Unfortunately his budding aspirations as a writer were somewhat stifled in his twenties by an ill-advised fifteen year career in the Market Research industry. At this time, writing opportunities were somewhat limited by having to go to work every day. However he still found time to write numerous letters to various manufacturers advising them on their product ranges. He also produced many spoof newsletters for the countless activities that a social life based around the pub entailed.

Eventually he left the world of sales figures behind to become a stay-at-home dad, giving him a whole new source of material to write about. His first two humorous parenting diaries, "Fortysomething Father" and "Austerity Dad", were published in 2013. This was followed in 2014 by a third diary recording his experiences in the world of sausages. He also continued writing about his parenting experiences via a weekly column in the Oxford Mail.

In the summer of 2014, Jason released his first novel, "The Time Bubble", which was a huge hit both in the UK and the US, achieving the coveted #1 spot in the YA Time Travel category. The sequel, "Global Cooling" followed in November. The trilogy was completed in 2015 by "Man Out Of Time."

He has also released two spin-off novels related to the series. First came "My Tomorrow, Your Yesterday", the story of a man living his life backwards, one day at a time. His latest release is "Midlife Crisis" following a middle-aged man down on his luck who gets the chance to revisit his own past.

Want to know more about Jason? - find him on Twitter @AusterityDad or check out his Facebook page for the latest news: https://www.facebook.com/TheTimeBubble/ 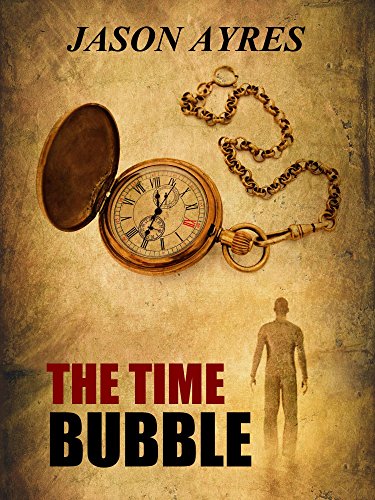 Fans of time travel stories will love this unique new slant on the genre - the first of a series by bestselling author Jason Ayres.
"This book has everything you'd expect from a rollicking good read - adventure, mystery, science fiction and even romance. If you are looking for the proverbial 'page turner' then this is for you".