Kate Danley is an award winning playwright and novelist. She spent over five weeks on the USA TODAY bestseller list and has sold over half-a-million books globally. She has been honored with the Garcia Award for Best Fiction Book of the Year (The Woodcutter), McDougall Previews Award for Best Fantasy Book of the Year (Queen Mab), and her series Maggie MacKay: Magical Tracker has been optioned for film and television development.

Her 1930s screwball comedy Building Madness won the prestigious 2016 Panowski Playwriting Award. Her plays have been fully produced in New York, Los Angeles, Chicago, Ottawa (Canada), Bath (UK), Grande Prairie (Canada), Seattle, Houston, Baltimore, and Anchorage, among others. She graduated from Towson University with a BS in Theatre Summa cum Laude and was named a Maryland Distinguished Scholar in the Arts. She trained at RADA London, The Groundlings, Folger Shakespeare, Theatricum Botanicum, Acme Comedy Theater, and Seattle Rep. She performed her original stand-up at such clubs as The Comedy Store and The Icehouse. She belonged to the main company and wrote sketch for a weekly show in Hollywood. She won the Breckenridge Festival of Film Screenplay Competition for her feature script Fairy Blood. Her film shorts The Playhouse, Dog Days, Sock Zombie, SuperPout, and Sports Scents can be seen in festivals and on the internet. 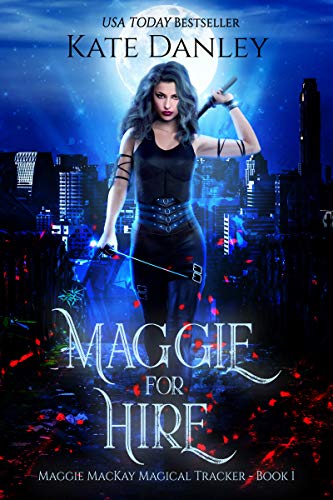 "If urban fantasy could be bottled, then this story is a shot-glass full of awesomesauce." - Dark Side of the Covers Reviews
My name is Maggie MacKay. When monsters show up in Los Angeles, I get the call to haul 'em back to the dimension where they belong.