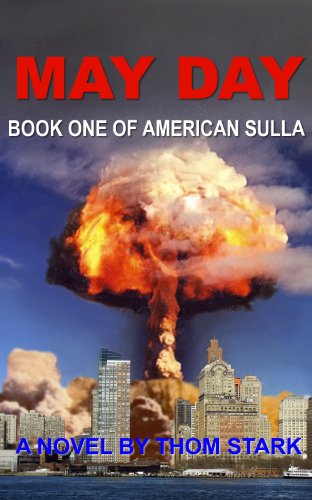 May Day: Book One of American Sulla Book Review

May Day - Book One of American Sulla

When the unthinkable happens … what happens next?

The crisis has only begun.

President William Orwell Steele and his cabinet labor to cope with the aftermath of an unprecedented terrorist attack, while a host of ordinary Americans struggle merely to survive in a world where everything has changed. From the corridors of power to the squalor of refugee camps, from world capitols to the lawless frontiers of Pakistan, from economic collapse to armed rebellion, the impact of the May Day attack swiftly spreads to every aspect of society and every corner of the globe.

The most ambitious thriller in decades, the first book in the American Sulla trilogy will leave you cheering the debut of a major new talent.

Praise for May Day - Book One of American Sulla

"The visual imagery is excellent and reading chapters of May Day is like watching episodes of a television series, I can easily imagine this an action packed film. The graphic detail is delicately woven into the chapters in such away that it haunts you long after you finish reading."

"This is a book that makes me wish I still belonged to a book club, because I desperately want to talk about it for hours. It's the type of book that also makes me wish I could give it more than five stars because my enjoyment of this book goes way beyond, well... enjoyment. Stark raises questions most of us never consider. What happens to those who survive the blast, only to discover their homes will remain uninhabitable for generations to come? Where do all those people go? And, how does a government that is barely holding up under crushing debt manage to find the resources to support millions of refuges? What happens when the economy begins to crumble, or when insurance companies file bankruptcy? He also looks at our country's deep-seated prejudices. He shows us the ugly side of humanity and people who seek to profit from disaster, and shows us those who use tragedy as an excuse to let lawlessness run rampant. He introduces us to a conspiracy theorist who has the ability to tap into the fears of like-minded individuals who are willing to act on their hatred. He also delves into the psyche of a man who is forced to harness almost unlimited power while under immense pressure and personal grief.
It isn't often that I can recommend a book to all readers, regardless of the type of book they like to read. But, in this case, I can make an exception. The book is highly readable--the type of book that should be made into a movie. Read it and really think about the question, 'What if?'"

"A great read for anyone who loves techno-political drama."


Thom Stark has been a professional writer since 1995. He is best known as a columnist and feature writer for the late, great Boardwatch Magazine. Mr. Stark currently lives in Chillicothe, Ohio, with his wife Judy and their lovable mutt Miss Watson. He is hard at work on War - Book Two of American Sulla.